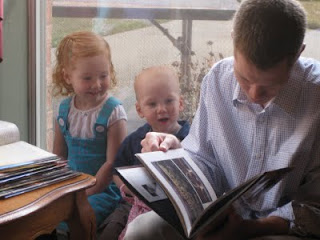 It's been a little while. Since our last post a lot has happened. It's been a busy few weeks.

We spent Thanksgiving up at the Wright's. We had a great time. It certainly started off with a bang though. We were there twenty minutes when Jonathan fell and split his cheek just below his eye. The cut was about 1/2 inch wide so we went and saw a doctor friend and luckily he was able to glue his cheek together right then. Other than that it was pretty uneventful. We got to spend time with Hyrum's parents and sister Rachel. Hyrum had a great time : ) wheelbarrowing dirt around their back yard and assisting the tiling of the bathroom floor. I had some time to work on Christmas Projects and just chill. I had plenty of food requests that I obliged to make sure they would let us come again. We were certainly busy.

One of Jonathan's favorite things to do right now is climb on our table. He thinks that is his play area. I have to get him down or at least hold the chairs around the table 7-10 times a day to keep him from getting up there. The day I took the pictures it was cute but mo 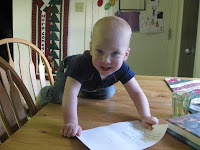 stly it drives me crazy. He is starting into the frustrated toddler phase of life. He has started throwing temper tantrums when I tell him no.

Jonathan also started waking up between 5:30 and 6:30 am and just cries. If I go get him though he will sleep in my arms until 7 or later if I let him. I wish he would just sleep in his bed.

He is such a talker though. A couple weeks ago a friend was watching the kids and when I picked them up she commented that she couldn't believe how vocal he is. Hannah was so quiet as a toddler but Jonathan is always making noise. He loves to talk to us and he is constantly pointing at things and saying something about it.

Hannah is great. She is so silly and fun most of the time. The other day I mentioned the word "roller coaster". She repeated it with question in her voice. It was so cute. It is fun to see her learn new words and new things. She always wants to know what things are and why are they that way or why are they doing that.

At the grocery store she will see little kids and try to talk to them and she will comment about how they are her age. It is so fun to see her growing up. The other day I was struck with how close kindergarten is. It was a pretty scary realization. I don't know if I will be ready for that not to mention her.
Posted by Heather at 2:50 PM No comments: