Since Jonathan could move, I wondered how long it would take us to have to get him stitched up or get a cast on a broken arm or collar bone or something that a band-aid and a hug from Mom couldn't fix.

We made it to his second birthday and I felt really good about it. I thought, well, that wasn't sooo hard, maybe we'll get to three without an emergency room trip too.

I thought wrong. Friday it happened. I was preparing lunch for a couple friends and just as I was finishing everything up, Jonathan started to cry in the living room. I started to tell him to toughen up because he and Hannah had been at each other all morning. He turned the corner into the kitchen and all I saw was the blood streaming down his face. I took him into the bathroom so I could see where the bleeding was coming from and try to figure out just how serious it was. He fell into the hinge on our TV stand and had a 3/4 inch vertical cut above and centered between his left eye and his nose. 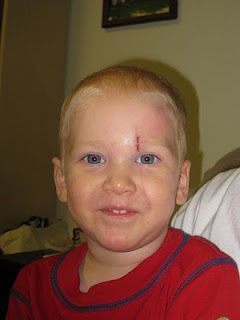 I quickly got my things together, made a few calls to Hyrum and the pediatrician, and waited for one of the friends to arrive for lunch. She arrived just as I finished mixing the kids' Mac'n'Cheese. I handed her my key, said lunch was ready, enjoy and please can you take Hannah with you when you're done. Like the wonderful friend she is she said yes and we left.

Jonathan was such a trooper. You wouldn't even have know anything was wrong after that initial shock. I think he was more concerned about the blood dripping in his eyes than any real pain from the cut. We went to an emergency room alternative place and were able to get in and see the doctor pretty quick. They numbed him up gave him a little sedative, we ate some lunch checked on Hannah and then he got six stitches. He didn't even flinch. I was so proud of my little man. When they finished he happily sat up and exclaimed, "All done."

He'll get his stitched out on Thursday and hopefully we won't have to do this again for a while. Somehow though, I think that might be misplaced hope.
Posted by Heather at 9:05 PM 3 comments: 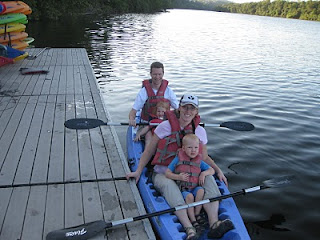 Last night we took the kid kayaking. It was a lot of fun. Hyrum and I went just after Jonathan was born and we've wanted to take the kids for a while. 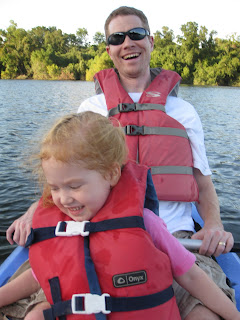 We saw some turtles and ducks and watched the UT woman's rowing team practice. It was warm at first but after getting a little wet and with the sun setting it was quite pleasant. The kids enjoyed trying to row. Jonathan wanted to go home towards the end because he was tired so he just leaned on me and relaxed. It was just a good night being together and enjoying being outside. 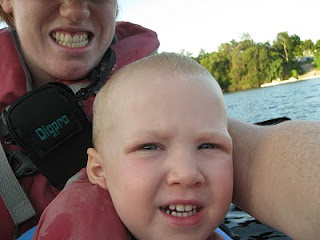 Posted by Heather at 4:41 PM No comments: 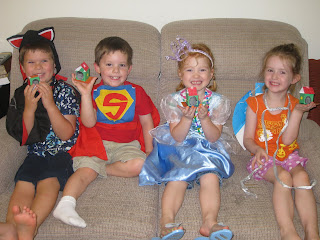 Hannah started preschool with her friends about five weeks ago. So far she is loving it. This year we, the moms, are teaching a 4 week unit on one topic. It seems to be working out really well.

The first mom is an excellent teacher and I was a little unsure of how to follow her act. We had a good time on Tuesday though. I ran out of material, at least that I wanted to cover and the kids seemed a little tired of what we were talking about though they hadn't quite mastered it. I think it went well though. I am excited about this unit and I think that the kids will have fun too.

We are working on spacial relationships. We worked on left vs. right for most of the class time and then worked on things like above, below, behind, in front, under. It was fun. The kids made little houses and decorated them with buttons and their picture to review.

They are holding their houses in the pictures but they are hard to see with their fun dress ups. I think the dress ups are the highlight of coming to our house.
Posted by Heather at 8:41 PM No comments:

Dancing in the Rain 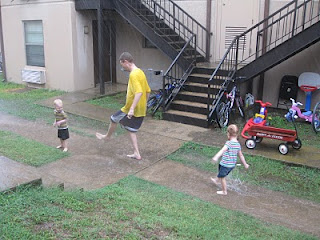 This week we got a little rain, well a lot of rain from Tropical Storm Hermine. I took Hannah to school on Tuesday and the kids had such a hard time not jumping puddles so, in a moment of weakness I told them they could jump in puddles after nap time. 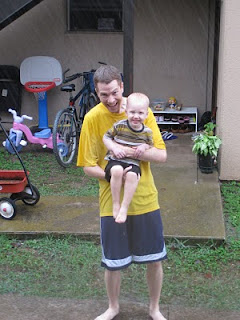 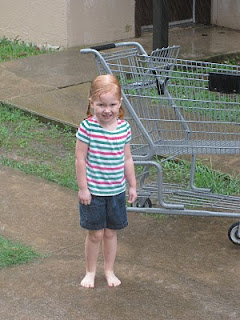 Around lunch the rain subsided a little. They were really afraid they wouldn't be able to jump in the water. Well, about 3 that afternoon it was coming down in buckets so we changed everyone's clothes and woke Jonathan up from his nap and out they went for 30 minutes of rain stomping and singing and dancing with their dad. I'm not sure who enjoyed it more, Hyrum or the kids. 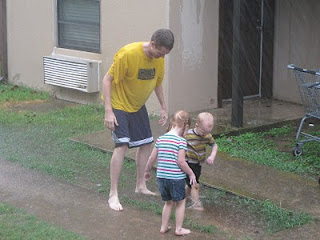 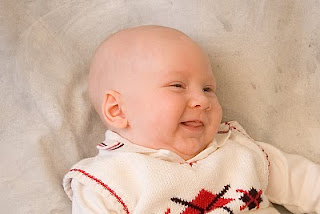 Jonathan is 2. We have survived two years with that boy and hope we survive another 2. Jonathan is such a joy. He is funny and just so active. He definitely keeps us on our toes. 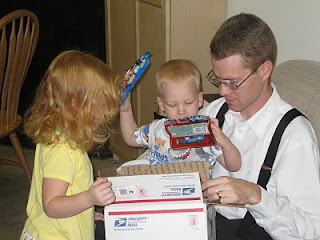 Jonathan loves to smile and play. He loves to talk and tell us stories. He loves Hannah and repeats nearly everything she says. He is all boy. He loves his cars, particulary his "McQueens," of which he know has four. He is so grown up and sometimes it takes a lot to remember that he is only 2. We love that kid. 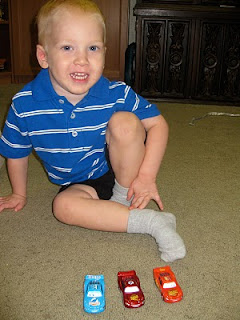 He had a good birthday. We got up and opened presents early since Hyrum had to head to church for meetings. Jonathan was so excited. He got clothes from mom and dad, The Wrights sent a tractor with animals and of course, it makes noise. Grandma and Grandpa H. sent some clothes and one of the newest Lightening McQueen cars. He was in heaven with his tractor and car. 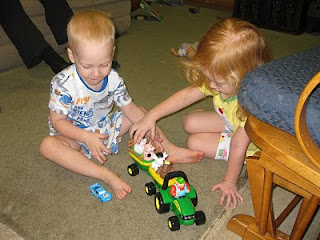 He played for the morning and then off to church we went. We got home and had pizza for dinner. We weren't expecting Hyrum to be home yet but he was able to come home for dinner. It was nice to be together. Then came Jonathan's favorite part, cake. He saw me bake and frost it on Saturday and was distraught when he couldn't eat it Saturday night. It was the easiest cake I think I've ever decorated. He loved it. He was squealing and so happy about another McQueen. We enjoyed chocolate cake and ice cream and then they were off to bed. 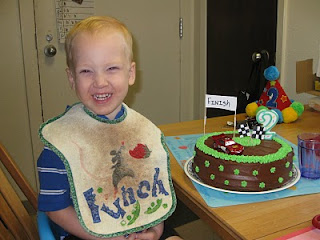 It was a good day with our little man. We love Jonathan and are so glad to have him as part of our lives. What a change we had two years ago. I don't think we were quite ready for him but we wouldn't ever give him back.
Posted by Heather at 10:33 AM 2 comments: