I've always enjoyed puzzles of one kind or another.  Logic puzzles, jigsaw puzzles or physical puzzles; about the only thing I don't like is word puzzles.  I appreciate the intellectual element, as well as the experience of working with a group of friends towards a common goal.  As a child, it wasn't uncommon for there to be a jigsaw puzzle on a table somewhere in my parents' home, and even after leaving home, it seemed like a puzzle would be on the counter when I returned.  Particularly at Christmastime, there was always a puzzle somewhere where family and guests would put a piece or two in.

More than 20 years ago, I got a 2500-piece jigsaw puzzle for Christmas.  It was the biggest puzzle I'd ever seen in person, and I wanted to work on it.  A New England gristmill in the fall, it was full of subtle shades of red and orange and yellow, with a bit of stonework thrown in for good measure.  It measured over six square feet, and I didn't even have the space to do it at first.

Over the years, I've taken it out a few times, but never really made any progress.  It's been on a table in my room, under the bed, and in common areas, but each time progress stalled and I had to put it away, uncompleted.  Finally, this past Christmas, when my in-laws were in town and I was on paternity leave, I decided to take advantage of the time (and our new living room lights!) and make some progress on The Puzzle.

That was almost a month ago, and thanks to the diligent efforts of extended family, children and even guests, we've made good progress.  My biggest fear was that with all the starting and stopping over the past decades, a piece had gone missing.  Between young children, couch cushions, carelessness and the occasional vacuum cleaner, there was simply no way that all the pieces had made if from my youth to today.  Every time we finished a section there'd be a few pieces missing, and I was convinced we'd never find them.  But we always did.

Today, right after dinner (and right before pulling Jonathan's first tooth), we finished the puzzle.  It was a group effort, to be sure, but all the pieces were there and we finally got it done. 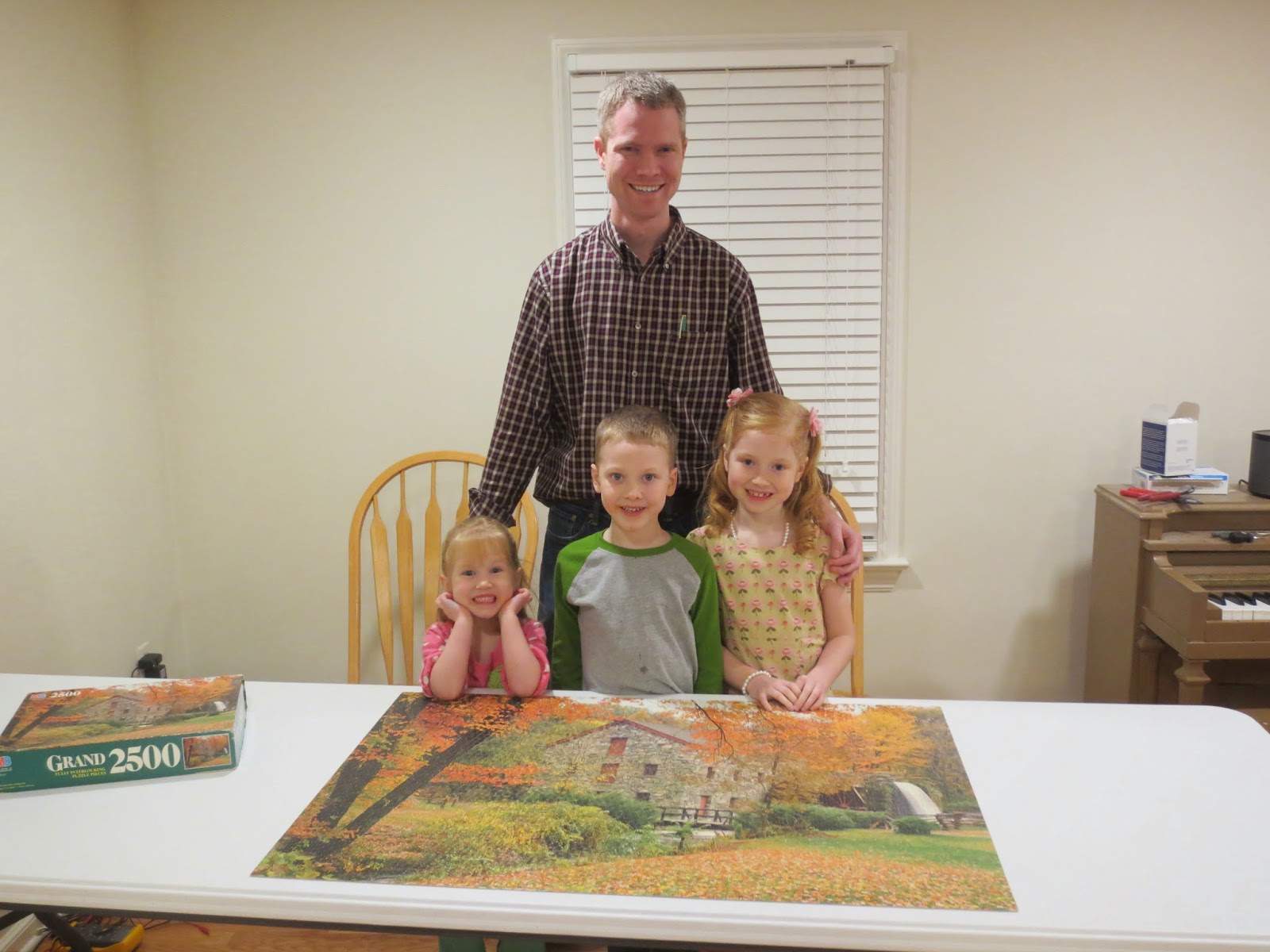 We're not really sure what to do with it now.  The kids don't want to do it again, and so are against putting it away.  I'm kind of leaning that way as well, so we might just look to preserve it somehow.  Does anybody know anything about gluing and displaying jigsaw puzzles?

On Sundays we have church this year from 11-2 am.  I like being a little more relaxed in the morning as we try to get everyone ready for church--though we almost always end up rushing anyway.  Because we get home at 2 I try and get dinner ready asap and we generally skip lunch.  The bonus is a little more time together in the evenings before we put the kids to bed. 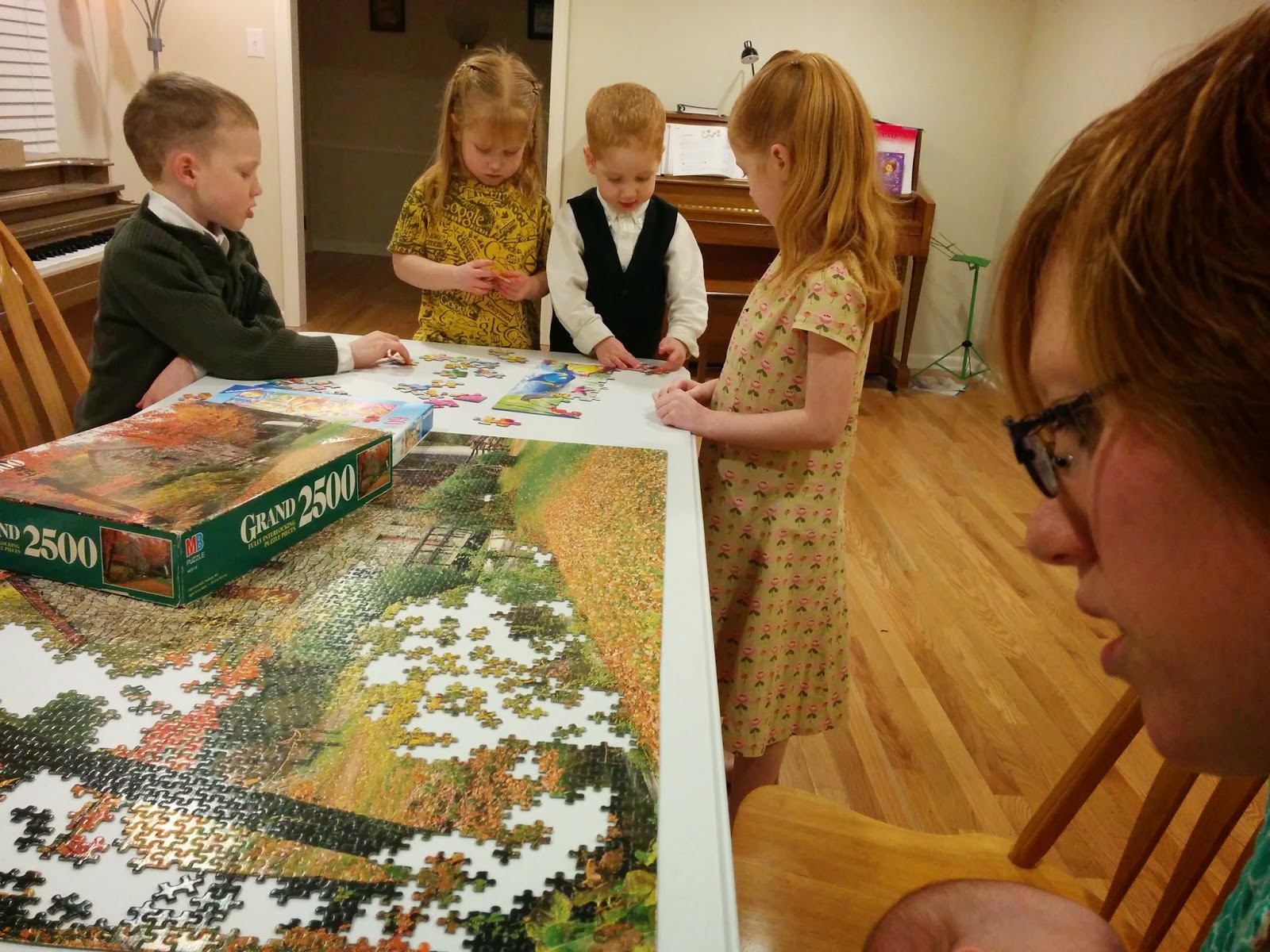 Hyrum started this puzzle on Christmas Eve and we are still working on it.  Tonight the kids decided they wanted to participate in puzzle time as well and brought up puzzle they had received for Christmas.  It was nice to be together talking with minimal fighting.  I

I have fond memories of playing games on Sundays and I look forward to when our kids are old enough to do that.  For now, puzzle time works.