After leaving Baxter State Park, we did laundry and disposed of our garbage.  Then we drove north to St. John, Canada.  Why, you may ask, mostly, because we could.  It was a nice drive but we were ready to get to our hotel and showers.  We stopped at an old train station just over the border.  It was a good place to stretch our legs.


We went to check out the Reversing Falls in St. John and saw it a couple of times.  Nature is so fascinating.  We went to church there on Sunday and everyone was very friendly.  Mostly people were perplexed as to why we'd driven to St. John for church.  So was I : )  We just like to drive and what is a road trip without a stop over in another country when it's so close--yes a couple of hours is close.


That Sunday night we drove back down to the States and set up camp in Acadia National Park.  We decided to do a 3 mile hike from Sand Beach, up and around, Gorham Mountain.  Along the coast there were several little trails leading to granite outcroppings and tide pools.  The tide was out so we were able to explore a bit.  It was really quite fun.  I hope to do it again when I don't have a baby strapped to me.  It was a nice morning but gradually the fog rolled in while we were at ground level.  It burned off a bit as we got higher up the mountain but we still couldn't see very far at the top.  On the mountain, we found wild blueberries, for which Maine is famous.  The kids loved to stop and pick them though we were anxious they keep moving.

We walked down to Sand Beach after going up the mountain.  It was the carrot to keep the kids going.  We ate lunch and the kids played on the beach.  There were quite a few people swimming but the water was cold.   After a bit the sun came out and burned off the rest of the fog.  That night we enjoyed our first and possibly only Lobster Dinner.  We drove to the far end of the island and while the kids dined on grilled cheese and hot dogs, I ate a Maine Lobster Roll and Hyrum cracked his way through a lobster dinner.  We were both underwhelmed by the lobster but the experience was fun and one we will remember forever. 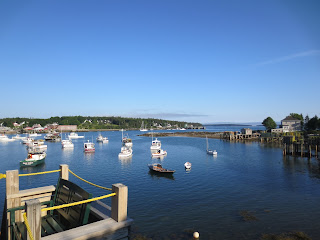 The next day we had hoped to take the kids on a carriage ride among the many carriage roads established by John D. Rockefeller.  Apparently though, they are quite popular and were booked until after we left.  We decided to hike around Jordan Pond, in which we included some walking on the carriage roads.  We were able to take in the interesting bridges and enjoy nature.  At one stop on a bridge over a stream we saw several toads.  The day started sunny but the fog found us again.  This time it was extremely thick and oppressive.  we drove up Cadillac mountain hoping to see some great views but we were very disappointed.  We went back to camp for dinner.  We soon found our beds as the fog was so thick that all night we had so much water dripping on our tent, it sounded like it was raining. 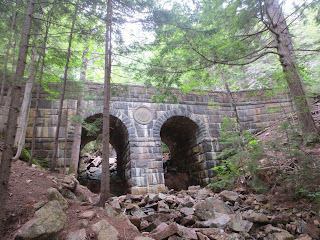 Our Wednesday adventure took us over the sand bar causeway to Bar Island.  On the way over we stopped and looked among the tide pools for shells and living creatures.  We did see a small crab and a hermit crab.  The kids found plenty of shells to bring home.  We hiked on the island and made it safely back before the tide came in.  We wandered around Bar Harbor for bit, bought some souvenirs and truffles for the kids.  We decided we'd give Cadillac Mountain another try and after waiting a bit for parking, enjoyed much clearer views than the day before.  The wind was going though and we only spent a bit of time there before the kids and I drove back to our campsite.   Hyrum decided this was a prime opportunity to practice hiking without little feet as he was preparing for a backpacking trip with some buddies a few weeks later. 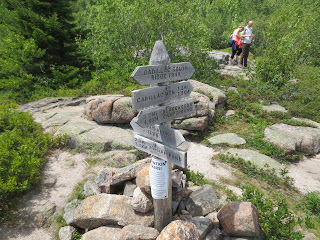 The next day we broke camp and headed down the coast.  We met some Texas friends at Seabago Lake and enjoyed some time with them before heading back to their house for a couple of days.  The kids warmed up fast and it was great to visit with the Josh and Reianna and their kids.  Good friends are hard to come by and we have been so happy to see a couple of ours this summer.  It was hard to leave the Cambridges but we were ready to get home.

We drove south and stopped at Battleship Cove.  Jonathan had been really disappointed about not being able to take the carriage ride so we found a place with several WWII era naval boats.  Jonathan has been really interested in WWII so it was a perfect stop for him.   On Sunday we drove through NYC.  It was really my first time seeing the city in daylight.  It was really fun though we only drove through it.  We drove right by the Empire State Building.  Someday I'll go back and experience the city.  Late Sunday night we pulled into our house.  It was good to be back in our own beds. 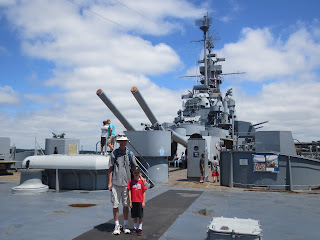 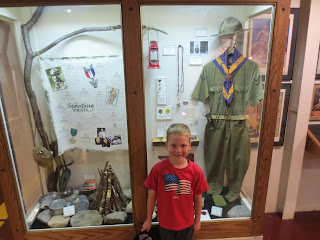 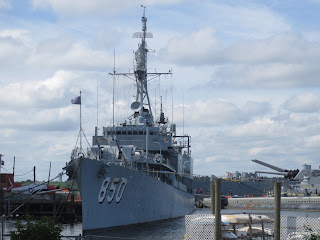 This trip was such a blessing for our family.  We saw wonderful things and spent quality time together as a family.  The challenge is maintaining that connection all the time.  There were hard moments and tests of our strength and character but I would do it all again in a heartbeat.
Posted by Heather at 8:38 PM No comments: 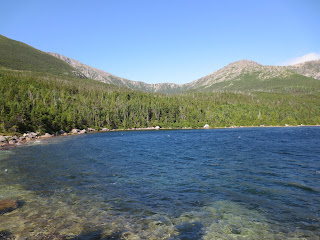 We spent the next night in New Hampshire and then the next day we went into Maine.  Our first Maine adventure was staying in primitive Baxter State Park in north/central Maine.  It was probably our most adventurous adventure thus far because the nearest town is 18 miles away, no garbage service, no running water, no bathrooms.  We were only people with small children anywhere near there.  We had dehydrated our food before going and borrowed a high capacity water filter from my parents.  I was a bit nervous about it but it was really a lot of fun.  It's amazing how great it can be to really unplug and enjoy nature.

Our main purpose for stopping in Baxter is that it is the home of the highest point in Maine.  Mount Katahdin is the highest point in Maine and the northern most point of the Appalachian Trail.  Hyrum, Hannah and Jonathan had been preparing for a couple of months to make the hike.  It was 11 miles round trip and took them 11 hours to complete.  Hannah and Jonathan were by far the youngest people on the mountain that day.  By all accounts, it was tough and really hard but the kids both agree it was awesome and the best part of the trip for them. 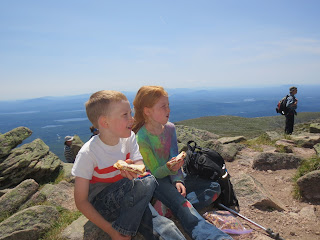 While they were hiking, the little kids and I decided to take a shorter hike around our campground.  I was hoping for a moose sighting and the kids were just looking for a good hike.  We walked to a lake and enjoyed the views then hiked further up the trail.  We hiked far enough that the kids were beginning to complain.  we enjoyed our lunch of beef jerky, dried pineapple, and sandwiches, then turned around and started back.  Near the lake we'd seen early on the hike there was a big rock.  When we first stopped, there were quite a few people, and a snake on the rock.   This time, we had it all to our selves.   We sat and enjoyed a few more snacks.  Just as I decided it was time to get back to camp I looked out to the lake.  There was a moose, enjoying her lunch.  We sat and watched her for a little while and then quietly headed back to the trail.  That just about made my day. (I have no pictures because the camera was with Hyrum and I left my phone in the car) 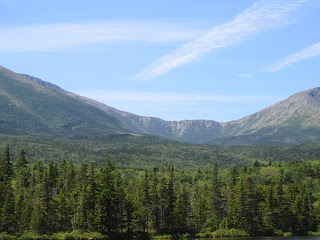 The next day we did just a little bit of hiking since Hannah, Jonathan and Hyrum were still a bit worn out from their hike the day before.  It was really gorgeous and indescribable.  It really was a great place to spend a few days.


A few years ago, Hyrum started writing a bucket list for while we are in Pittsburgh.  One of the things on that list was driving through New England.  We both really wanted to do it since I had great memories of being there are for a visit as a small child and Hyrum just loves seeing new places and doing new things.  We had time this past summer so decided it was time to go for it.  We planned a trip to Maine with a few stops along the way.  It was two and a half weeks of really great fun.  We saw neat things, had interesting experiences, and just enjoyed being together.


We decided to take several days getting to Maine.  We stopped at the highest point in New Jersey, stopped at FDR's house in Hyde Park, and the Joseph Smith birthplace in Sharon, VT.  Our biggest challenge on this trip was keeping Ben moderately clean.  He loved eating the dirt. 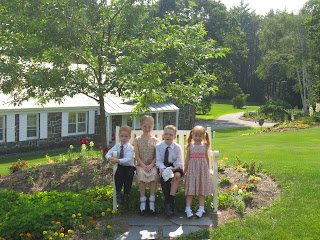 We spent a couple of nights in Vermont and the day between them, hiking the highest point of Vermont and eating Ben and Jerry's ice Cream.   The hike was pretty exciting.  In the northeast, there are no switchbacks.  You hike up over whatever is in the path.  We found some pretty gnarly boulders in our path. After handing the kids up and hoisting myself up, then seeing iron rings in the rocks, Charlotte, Spencer and I decided we'd wait for Hyrum and the older kids to come back.  We waited for a while, enjoyed our snacks and pointed the way to people who came after us.  Most made some comment about me hiking with the three littlest kids.  Hyrum and the kids made it back to us by the time we started to hear thunder at regular intervals.

We descended the path and enjoyed our lunch just before it started to drizzle.  We'd come halfway up the hill on a gondola ride.  The lift was shut down what it started to rain and thunder.  We waited, mostly patiently, for a couple of hours. Just before we were ready to start the steep and long hike down they started it up again to get everyone off the mountain.  We got to the bottom and the sun came out and it was several degrees warmer.

Our next stop was for some Ben and Jerry's.  It was super busy.  We bought our tour tickets and then hopped in line for some tasty treats.  The tour was fun and the samples at the end were good too.  It is a fun little stop I recommend, especially for little people.

The next day we headed into New Hampshire.  We stopped at the Cabot Cheese Creamery where we enjoyed lot's of really good cheddar cheese.  Then we followed that up with a stop at the King Arthur Flour Campus in Norwich, VT.  It was a really neat place.  There were wonderful flours, pans and other wonderful baking implements.  I was a happy girl : )

Posted by Heather at 7:08 PM No comments: