Today I made Charlotte's crib into a toddler bed. I also realized that we really do have to make sure we set her a place at the table. She always has a bowl, fork and a cup. She still sits in the high chair and I still have to feed her (I'm ok with that, less mess), but she is certainly growing up.

Jonathan is getting ready to take more responsibility on with regards to his personal hygiene and even almost always insists on taking a shower.

Hannah eats with a "real" fork these days and occasionally is even granted permission to have a knife. Hannah ties her own shoes and is responsible for putting her own toothpaste on the toothbrush--though yesterday after she did it, there was a piece of toilet paper in the garbage covered in toothpaste. Oh well.

They are growing up so fast. I look at Hannah and see what she will become more than I see who she has been. I am beginning to realize how soon Jonathan too will enter the school phase and that soon, Charlotte will no longer be "the baby." It's fun and a little sad at the same time. I love them and am learning to enjoy each today more than looking forward to tomorrow. Here's to the adventure of life.
Posted by Heather at 4:52 PM 1 comment:

I love these guys! 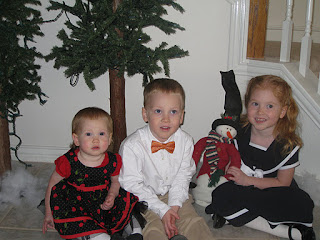 Today was one of those days that I couldn't help but love my children. They were so good. Sunday's can be a really hectic day with church and meetings associated with it. Not to mention the fact that we have late church, 2-5 pm and Hannah really needs to be in bed no later than 7 pm. It means a lot of juggling and clock watching.

Again, though, the kids were great today. We had to be to church early then Jonathan and I had to hurry home right before church started but he was so cooperative it didn't take long. We hurried back to church and had to sit in the foyer while the sacrament was being passed and Jonathan was more reverent than the teenagers sitting there too. Little did I know, Hannah was all by herself in the chapel. She was also extremely good. They sat almost the entire meeting without getting after each other. They sat through one talk without complaining, coloring or eating and then did great when they got to bring out their crayons and games. 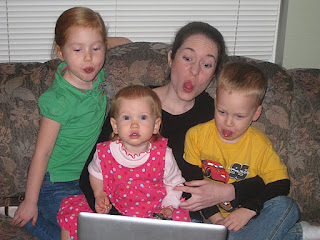 It was a Kodak moment if ever we've had one. They were so good when we got home and everything just worked out really well. They are such good kids and they are really trying to make good choices and do what's right. I love them and they are such a blessing to us.
Posted by Heather at 7:59 PM No comments: 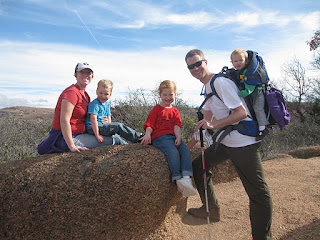 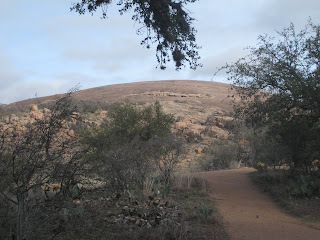 Monday Hannah was out of school and Hyrum decided to take the day off too. We decided to have a family adventure. Since we moved here, Hyrum has wanted to hike Enchanted Rock. It's basically a granite mound that rises from the land around it. It's pretty barren and really quite pretty in a rugged-sort-of-way. 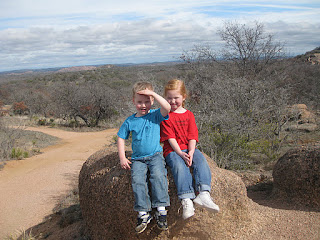 We packed a picnic and headed off to the rock. The kids had no idea where we were going and Hyrum just kept telling them we were going to see a big rock. They were pretty excited to be on a family adventure. We started up the rock about 11 and boy oh boy was it windy. The sun was out and that was nice but the wind was a little chill and whipping around like crazy. 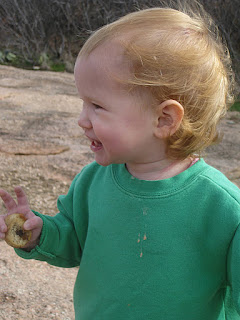 We made it up with Charlotte on Hyrum's back in the kid carrier and I encouraging and then at times pulling the other two kids from behind. It was a beautiful site from the top. We could the Texas mountains around us and various valleys all with neat rock outcroppings around. The top was pretty windy so we didn't stay long. We went around the back side and found a nice windbreak and had a snack. Charlotte was happy to get out of the pack for a while though we had to watch her so she didn't stray into an cacti. 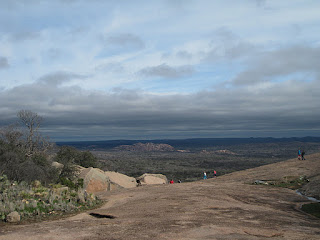 We headed back over the top after a brief rest and then it got exciting. The wind was now headed against us and Hyrum estimated maybe 45-50 miles an hour. Hannah and Jonathan were pretty scared. At one point they were clinging to me in tears because they were afraid they would be blown away. We assured them they were fine and I would hold on to them. After a few steps down the rock the wind eased up and they relaxed a little. Going down was way harder than going up. 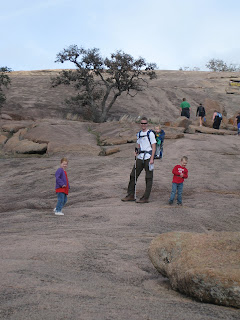 We walk through Echo Canyon and then around Enchanted Rock back to our car. We got back to the car around 1:40. The kids were tired and hungry but they did a great job. Hannah and Jonathan walked the whole time. Charlotte finally figured how to sleep in the carrier just as we got within site of the parking lots. We ate our lunch, ran around for a few minutes and then jumped back in the car to head home. We were tired, sore and sunburned but it was a good family adventure. We were so proud of Hannah and Jonathan. They are great adventurers and we're glad we can share things like that together. 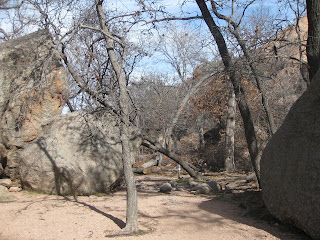 I just realized that we hadn't told everyone that we are having a boy. We found out in early December that Baby #4 is a boy. We are all excited but maybe none so much as Jonathan. He is eager to have a little brother to play with. In some it is unfortunate it will take a little while before they can really play together. There are times it makes my head spin : ) 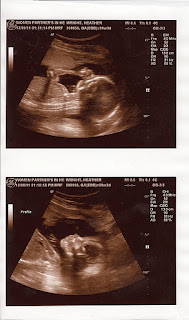 We are doing well and just looking forward for things to come. There is a lot of work to be done before our little guy gets here so we are keeping busy. I feel good that I already have almost 20 boxes packed and ready to go. I only have about a million to go, or at least that is how it feels.

We enjoyed a great Christmas break with Hyrum's family and are glad to be home and going after a bit of relaxation. We hope you all had a great holiday season as well.
Posted by Heather at 7:48 AM 3 comments: