After Pisa we spent a day in the Cinque Terre.  It was lovely and so nice to be outside away from the city.  Hyrum already posted about the Cinque Terre so I won't elaborate.

I spent a really long two days getting home to Pittsburgh while Hyrum stayed for his conference.  The kids didn't care much that I had been gone.  They were actually quite disappointed that mom was back and grandma was leaving.  There was a lot of work to be done and things to get ready though.


We spent the next month finishing up school and getting ready for our crazy, awesome summer we had planned.  We had ten days between our two big summer trips so I was trying to get as prepared as possible for the second one while trying to pack and getting for our trip to Texas.  I'll explain why later.  It was a busy month.

Posted by Heather at 6:29 PM No comments:

Pisa was a neat little city.  It was a rainy day when we went but thankfully we missed the really rainy moments.  We took the two hour train ride there and walked to the Field of Miracles.  This complex houses the Cathedral of Pisa, a baptistery, Cemetery, and the Leaning Tower which is the bell tower.  It is a beautiful complex with lovely grass that you can't walk or sit on.  Pisa was once a coastal town and as such the ground is very soft.  All the buildings on the complex lean a bit but the tower is the most obvious.  It was a fun trip and totally worth it.  The tower really leans and I find the history fascinating.  Besides the Field of Miracles we walked through a square with buildings from Napoleon's time in Pisa.  We also enjoyed some great pizza here.

Posted by Heather at 9:19 PM No comments:

This was our first glimpse of the Duomo or Cattedrale di Santa Maria del Fiore (Cathedral of Saint Mary of the Flower). It is enormous. 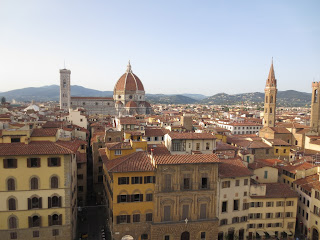 This picture doesn't do the Duomo justice.  We looked down the street and it dominated the view.  The marble facades were beautiful and the details amazing.  With all of these early Renaissance buildings we just couldn't help but be amazed at how marvelous the structures and art were for a people without any power machinery.  It was truly a testament to the ingenuity of people when they really want to "say" something.

Museums are often closed on Mondays so we visited a couple of churches and walked around the city to get our bearings.  We wandered across the Ponte Vecchio  and up the hill to the Piazzale Michelangelo then to the Abbazia di San Miniato al Monte (The Abby of Saint Miniato of the Mountain).  The story goes that Saint Miniato was beheaded and carried his head 12 miles up the hill before dying and the people decided to build a church on the site.  It was a lovely church and we went back later to hear vespers there one evening. 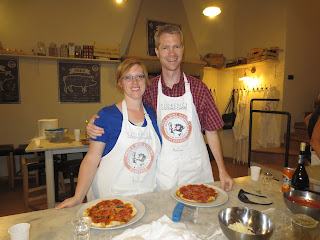 We enjoyed a cooking class where we made pizza and gelato.  I was skeptical about the gelato hype because I think ice cream is pretty tasty but I must say good gelato is fabulous.  Gelato is smooth and creamy.  It also has intense flavor.  Hyrum ate a lot of chocolate and I loved the pistachio.  We also tried lemon, chocolate chip, mascarpone, chocolate with chili powder (not good), raspberry, mango and maybe a few others.  We ate gelato at least once a day, often twice!  The best place, in our opinion was Gelateria de' Neri.  We loved it. 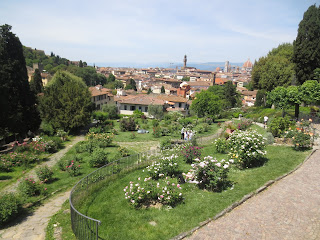 We did a lot of walking in Florence and saw most of the old city.   We visited a lot of churches and admired the frescoes, sculptures and stories that came with them.  I really enjoyed Michelangelo's sculptures in the Accademia.  The David sculpture is enormous.  It was interesting to see all the people sitting and sketching the statue.   We even saw a three or four year old sketching on her pad with her dad beside her.


The Uffizi was just crowded.  There were large groups everywhere and they just kept coming.  In some rooms we couldn't even move for the crowds in them.  In the larger museums there also isn't anywhere to sit.  We visited the Musuem of Science and that was interesting and a lot less crowded.

It is always interesting to be in places where there is so much history.  Compared with the United States, Florence is ancient and that always gives me pause to think and reflect on where my family has come from.  The wealth of the Medici family is evident everywhere. Their influence is both amazing and deplorable as you think about the corruption but all the art and history they patronized and preserved.