Some days things just work out! 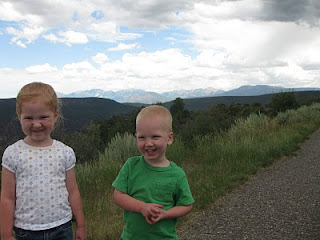 There are days when I get done with them and wonder how I will get through tomorrow and then there are days like today when I almost wish they could last forever. The past two days my kids have been so good. Jonathan has taken a long nap, they have played well together, not too much wrestling or yelling at each other and they were helpful for me.

I think it's because we're potty training Jonathan. He is upset about if for about the first hour and a half in the morning but then he is so easy going and cheerful. It's like a game to him. I've resolved not to get a whole lot done beyond keeping the house decent and it's extremely liberating in so many ways. I don't have to worry about going to the store because I can't fit it into my 30 minutes break from the bathroom. I never thought potty training could be the source of so much contentment but so far things are looking up.

I think it's also because Hannah is growing up. More and more I am reminded that she won't be my little girl forever. She is constantly reminding me of what she'll do when she's "a mommy." She'll be four in just a few weeks and it has gone by so fast. She is growing into such a responsible kid. I didn't think I'd miss her a ton when she goes to school next year but now I know I will cry. My little girl will be changed forever. How I am cherishing these days with her. 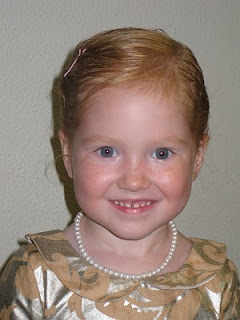 These last two days have been a great blessing to me. I am so thankful to be a mother. My Heavenly Father has so greatly blessed my life. I am anxious in so many ways to see how our new little girl will fit in but if Hannah has anything to say about it I know she won't be forgotten or left in the dust. "The new baby" is already a fixture in our lives as Hannah insisted she be included in the picture of our family she colored on Sunday.

Life's changes are great and wonderful. I hope that I learn what I need to before the chances pass me by though because time seems to only fly by faster as the days go by.
Posted by Heather at 9:00 PM 2 comments:

I posted the link to some of our vacation pictures but I thought I would add a little explanation to it.

In early June, I got a phone call from Hyrum. It went a little like this:

Hy: "How about the last week in June?"

Heather: I think I responded with a bunch of really confused babbling.

Then Hyrum went on to explain there was a conference in Oxford, England that he felt would be worth his while but he didn't want to go unless I went too because he had been gone a whole bunch over the last month.

We found a sitter for the kids, some good friends that I knew in New York and now live only about 20 minutes away and got everything ready. Then I found myself on a very large plane headed for England. A dream come true.

It was a good visit. It was short and towards the end a bit lonely since I was on my own during the days. The way Oxford University is set up is fascinating and I really enjoyed learning about that and just walking around the city. The weather was nice, a bit warm for the locals but way nicer than Texas. I got to walk in rooms where some of my favorite authors walked, streets where some prominent members of history walked. It was really cool.We even found time to have dinner with my brother who is interning near London. I am excited for a trip to the rest of the rest of the country and hopefully a chance to learn even more about England.

We got home Sunday night and after a crazy day of laundry, grocery shopping, and packing, we left Tuesday for Utah. We decided to take a little bit of a family vacation and stopped at Mesa Verde National Park. I have always wanted to see the cliff dwellings and Hyrum wanted to see it again since the last time he had gone was as a little kid.

Jonathan started getting sick Wednesday afternoon pretty quick after we got the park. I neglected to take his temperature until Thursday morning and when I did we found a 103 temp. We gave him some medicine, saw a few things in the park and then headed north a day earlier than planned. Hyrum's aunt was good enough to house us especially since we brought a sick child. Jonathan ran a fever until Saturday afternoon which meant I was a little frazzled from lack of sleep.

We made it to the annual Allred 4th of July celebration, "Grand Avenue of Fire" or "on Fire"--if you're Hyrum, and by that night Jonathan was happy and feeling a lot better. It was a quick trip and we spent the time visiting our grandparents and spending time with our family. Hannah spent a good amount of time playing with Hyrum's 4 year old cousin. They were pretty much inseparable when they were together.

Hyrum and I even to spent Tuesday almost exclusively together. That morning his mom volunteered to watch the kids so we got ready and dropped them off then we visited BYU campus and our old stomping grounds. After the customary raid on the candy counter we dropped in to see a friend from Austin who is now a professor at the Y. We picked up the kids, gave Jonathan a nap and then took them to Hyrum's sister, Sarah. She wanted to have them for an afternoon and we were happy to oblige. They played with her while we went and saw Toy Story 3. It was a good day.

It was a good trip, an odd trip but good. We've realized that the main reason for visiting Utah this time around was to see our grandparents. We love them very much and hope they are with us for a long time yet but we cherish every moment we have with them. We missed seeing my siblings that live there. We'll just have to coordinate our vacations a little better next time.

We're glad to be home and glad we got to have some good time together.
Posted by Heather at 11:47 AM No comments:

This link will take you to Walmart Digital Photo Center. I hope you enjoy the pictures.

Posted by Heather at 9:31 PM No comments: