Summer Time--Family Reunions, #1 and #2 in Utah 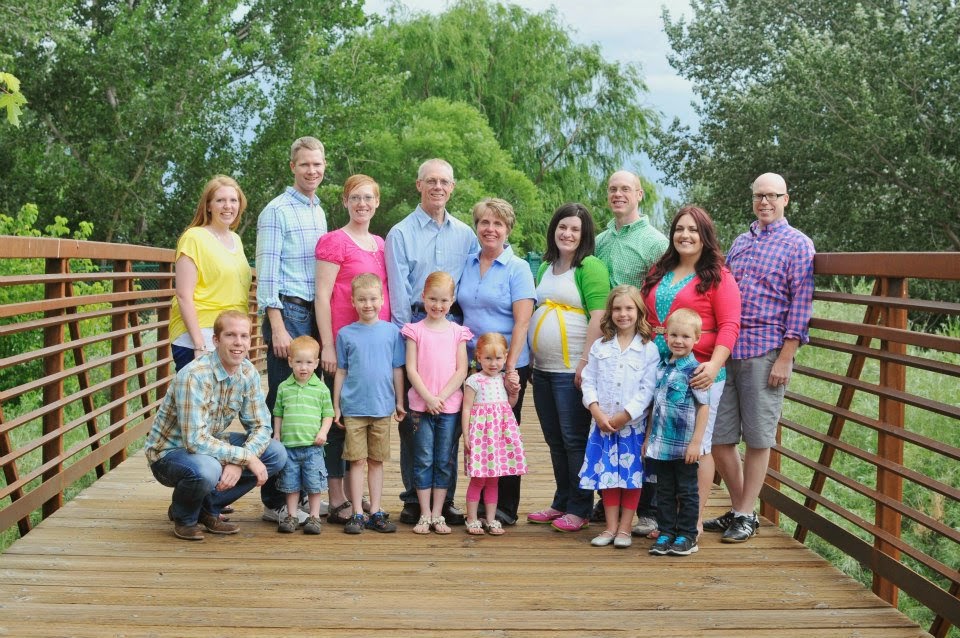 The reason for this years road trip was a series of family reunions conveniently planned in the same two week time period.  Thursday we had a day of laundry and groceries, and a visit with my grandparents.  Our reunion party started with family pictures with my parents and siblings.  This was the first time we had all been together since Hyrum and I graduated from college nine years ago.  There was always someone missing. 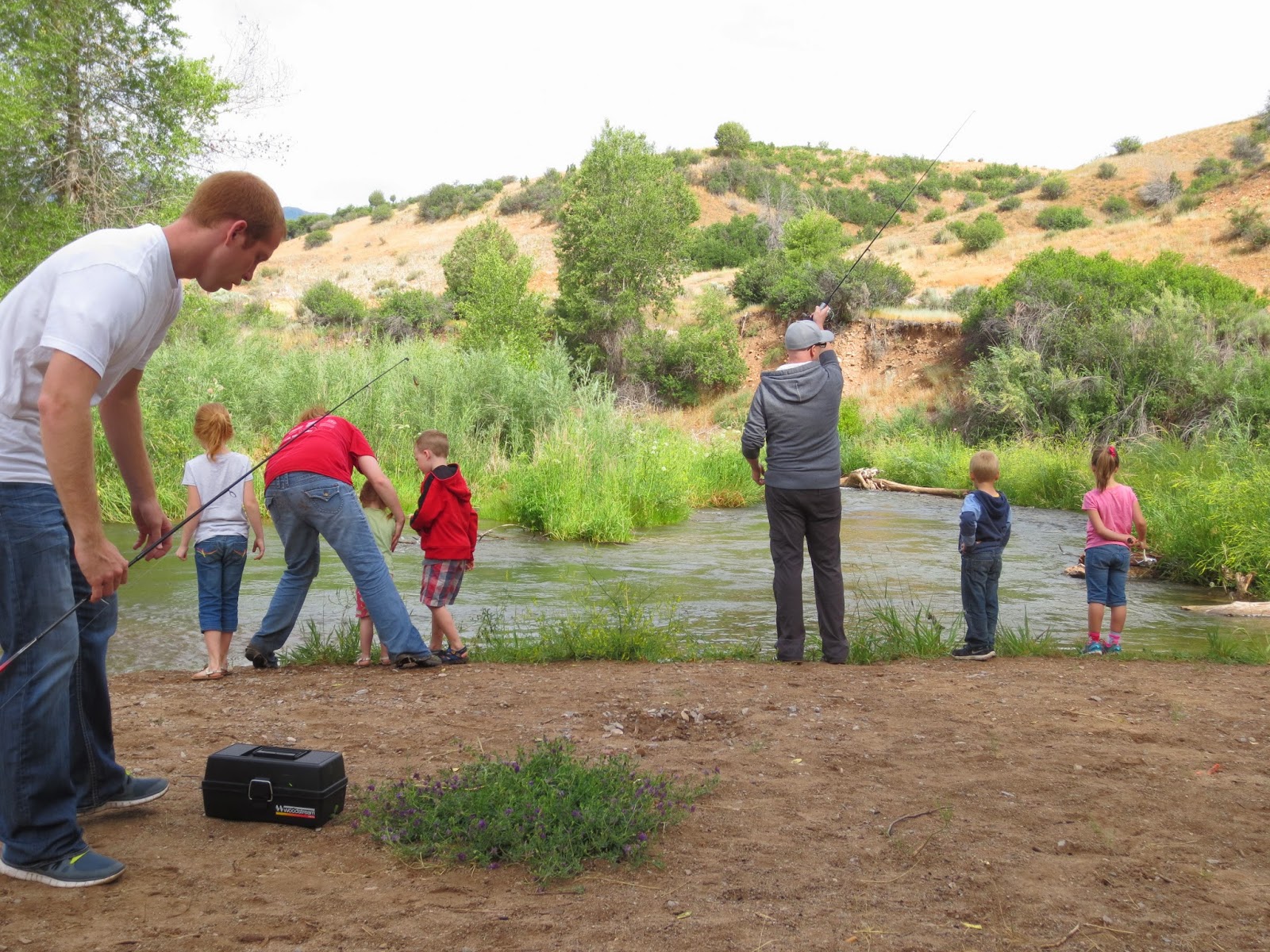 After pictures, we hurried to the campground so we could set up our tent before it really started raining. The next day we were up bright and early and enjoyed a tasty pancake breakfast.  The kids were quick to find the river behind our site and we spent the rest of the day on the little beach and in the water.  After lunch we wised up and let them put their swimming suits on.  The kids fared pretty well but I think just about all the adults came away with a little or a lot of sunburn.  It was fun just to sit around and talk.  Of course there was  a water fight too. 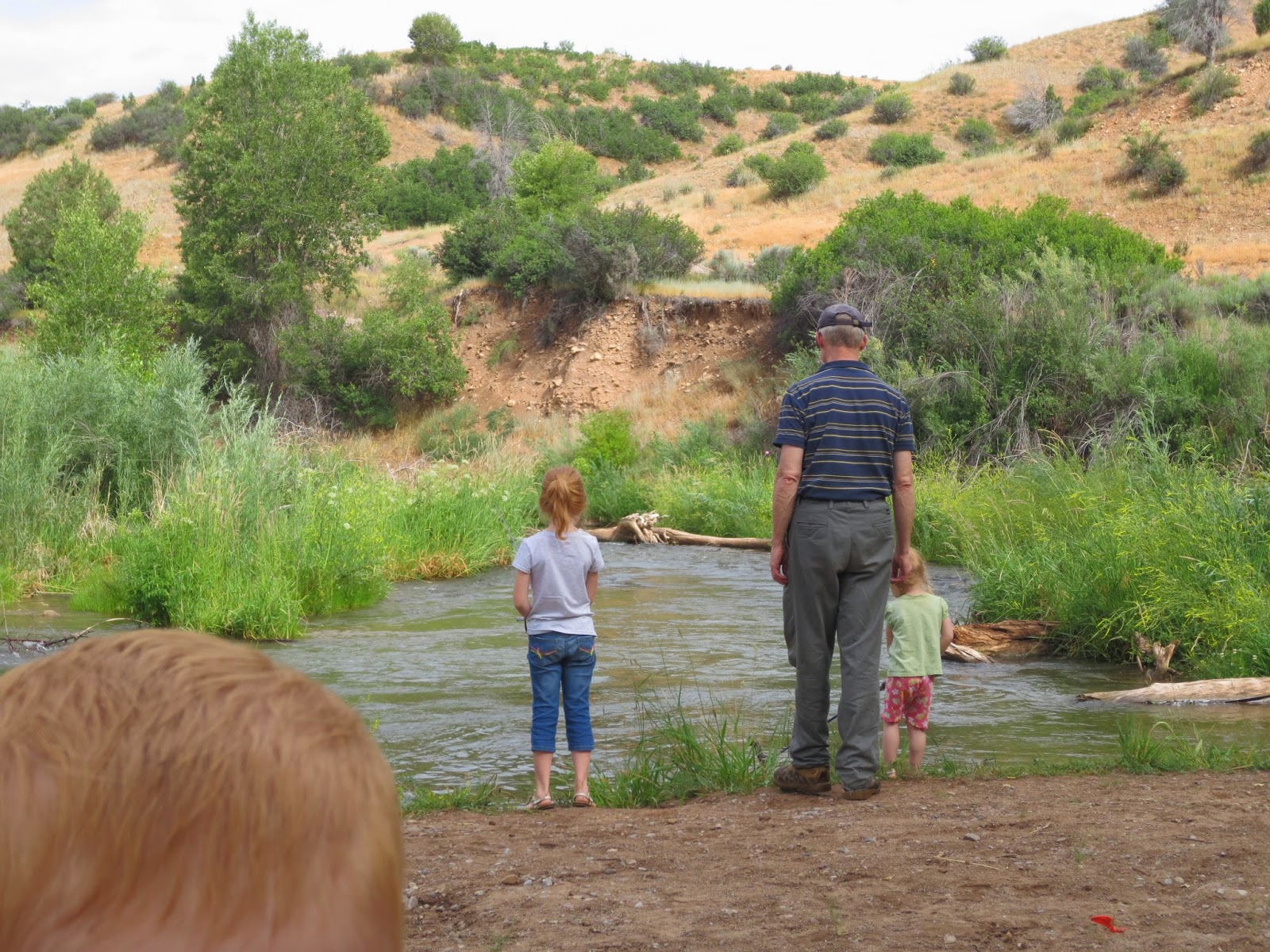 The next day was Saturday and we left after lunch to head to our second reunion with Hyrum's paternal grandparents.  It was nice to see that side of the family.  We joined them for dinner and pictures.  We weren't there long since kids were really tired and so was mom.  I am grateful though for those good people in our lives. 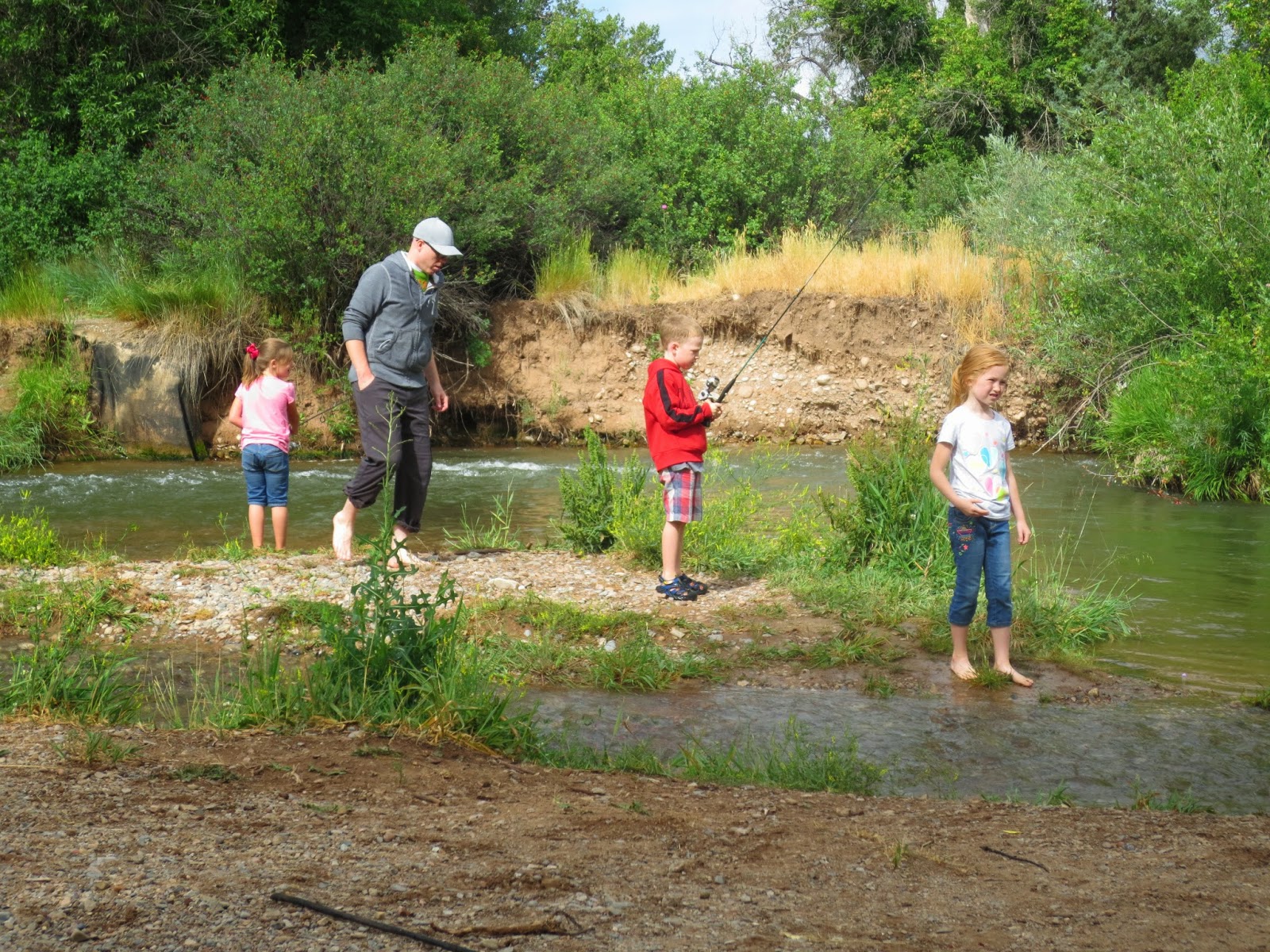 Sunday, we met my family for church.  We then went back to our home base for much needed naps and a/c.  Those couple days in Utah were hot.  We joined them again for dinner and enjoyed a few more hours with my family.


Monday we ended up cancelling our other plans in favor of doing laundry, going to the temple, and once more provisioning for our trip north the next day.  It was so nice to relax a bit that day.  Aunt Sarah took Hannah and Jonathan to the Aquarium for the afternoon so that was another added blessing and break.   Some friends from Texas live a few blocks for Hyrum's aunts where we were staying so I was able to stop in for a few minutes on my way to the store.  The downside to such a busy trip is that we never get to see everyone we want to.   It was a whirlwind few days that tested my mental and emotional limits.  We loved seeing the family we could and look forward to being back with a little more downtime.

Posted by Heather at 3:03 PM No comments:

After Nauvoo, we continued our trek West with a few more stops.  First up for the day was Charles Mound, Illinois.  That would be the highest point in Illinois.  One of Hyrum's life goals is to climb the highest points in the United States.  He added the caveat that he can't get states next to each other in the same year.  He says it's to spare me but I think it is his way of dragging it out as we travel across country every year. 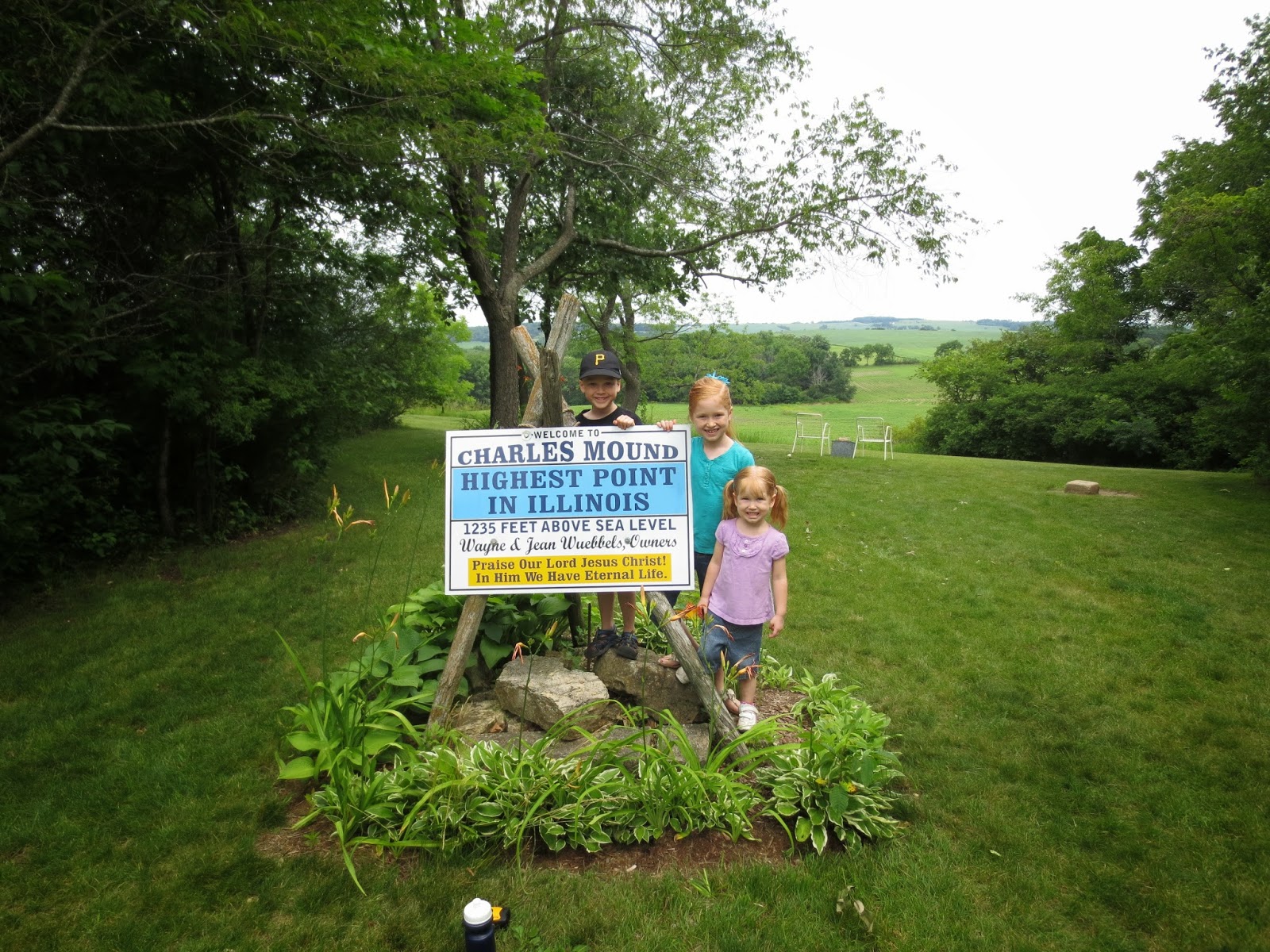 Charles Mound is located on private property and only open to high pointers four weekends a year.  We just happened to be passing on an open weekend.   We drove out to the middle of nowhere in Illinois, parked our car at the side of the road and trudged up the drive.  We passed a cow pasture, soybean fields, a pond, a man on a lawnmower and the other people who had come to hike the Mound, there were quite a few.  It was a 2 mile hike round trip and the kids did a great job.  They enjoyed looking around and we even found a few wild blackberries to samples.  We can now say we've been to the top of Illinois. 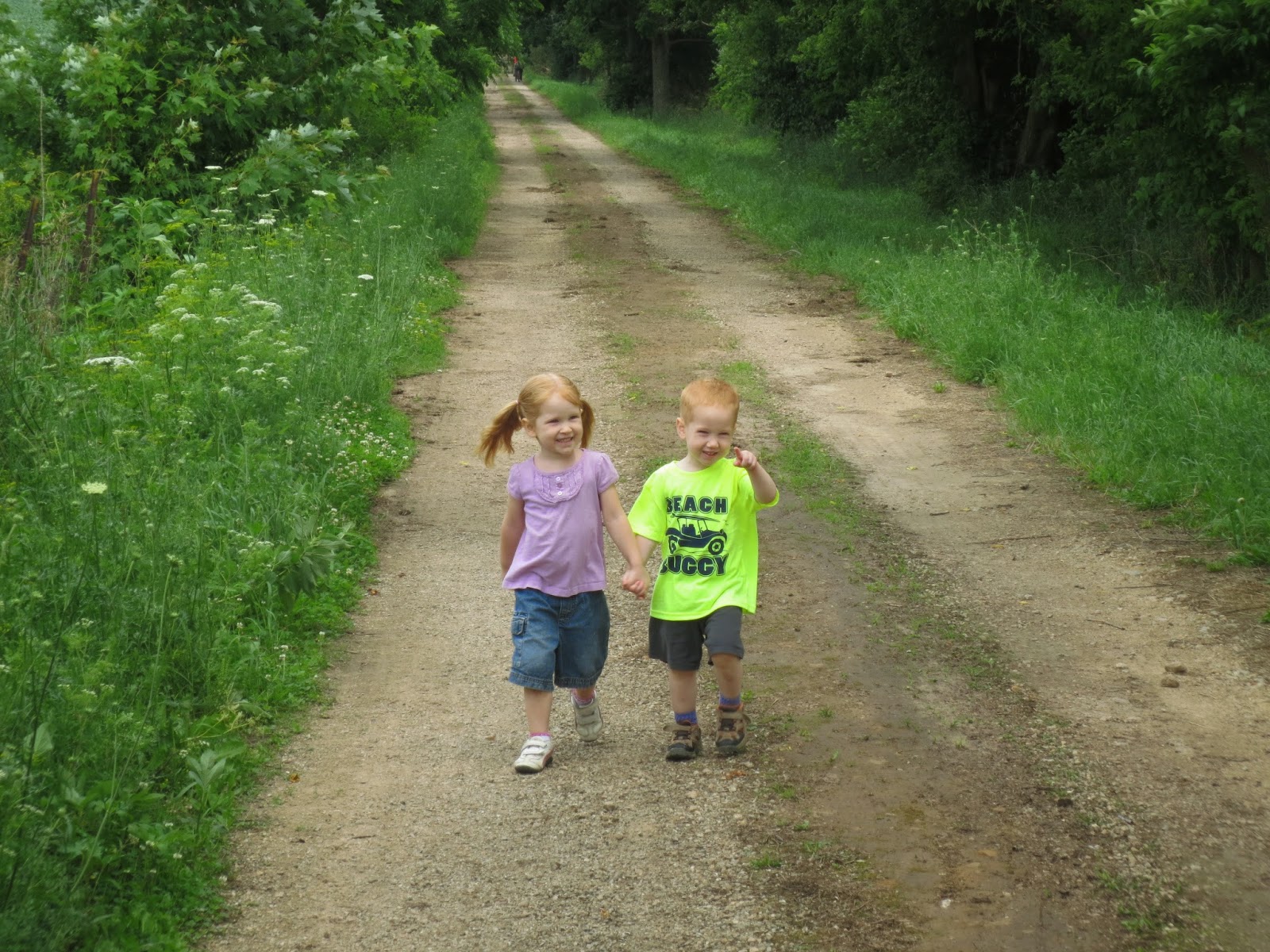 After Charles Mound we headed east to the Field of Dreams movie set.  The original baseball field and corn field are still there and you can go play a game, have a catch, run the bases or run in the corn.  That is of course just what we did.  It's all free, though of course there is a handy booth for purchasing memorabilia. 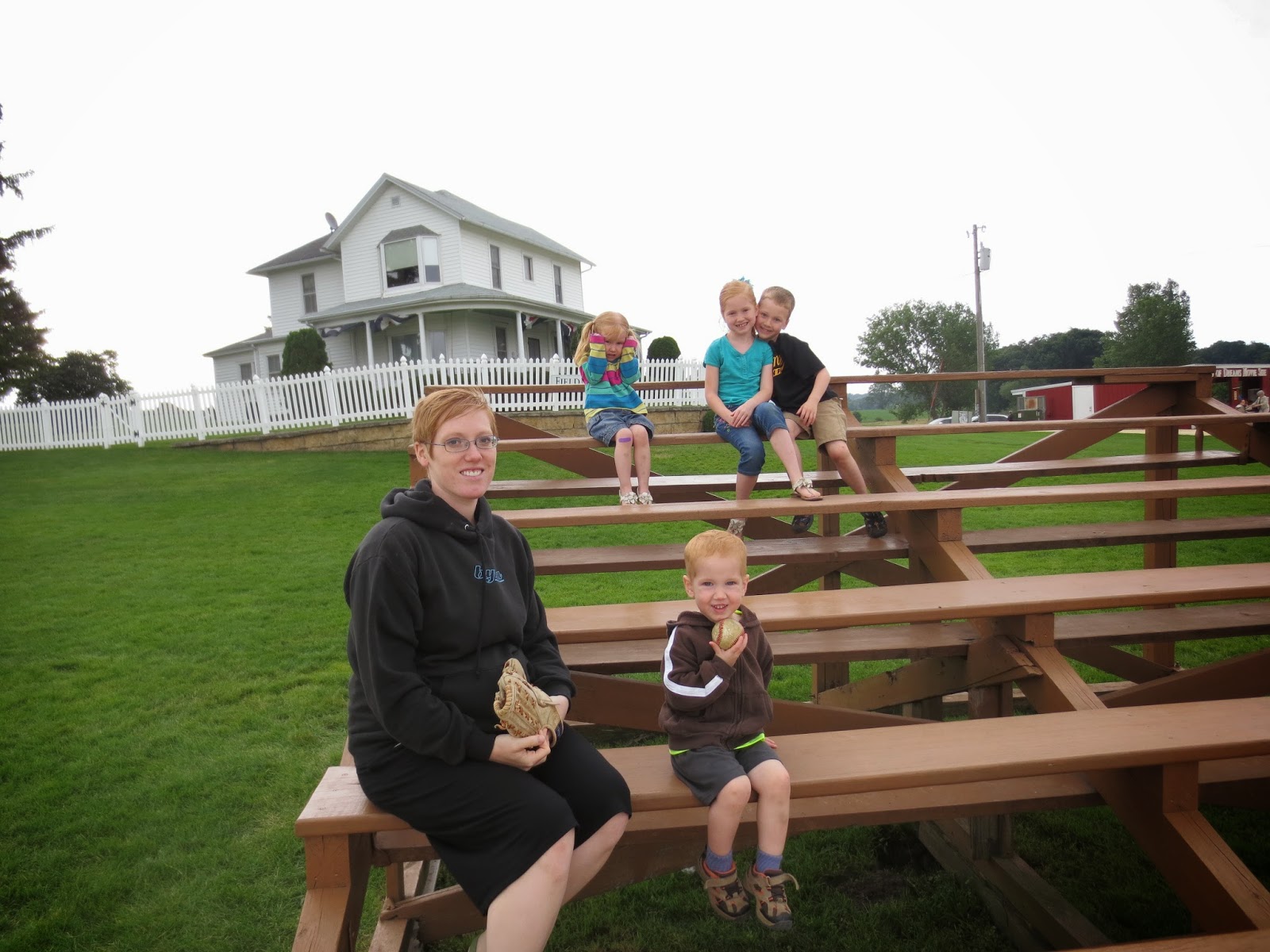 Then we were off so we could make it to Omaha that night.  The next day was Sunday so we went to church and drove all day.  We pulled into Rocky Mountain National Park around 8:30.  We hurried to put up the tent and get a quick dinner before night came.

When we go camping, morning comes early and when the sun rises around 5:30 am it comes really early.  We got up and by 9 am we were on our way to the trail head for a 3.5 mile hike.  Things started out a little rough for Charlotte but once we got her going she was a hiker extraordinaire.  I carried Spencer for the duration of the hike since little legs really slow you down and there was a lot of traffic on the path. 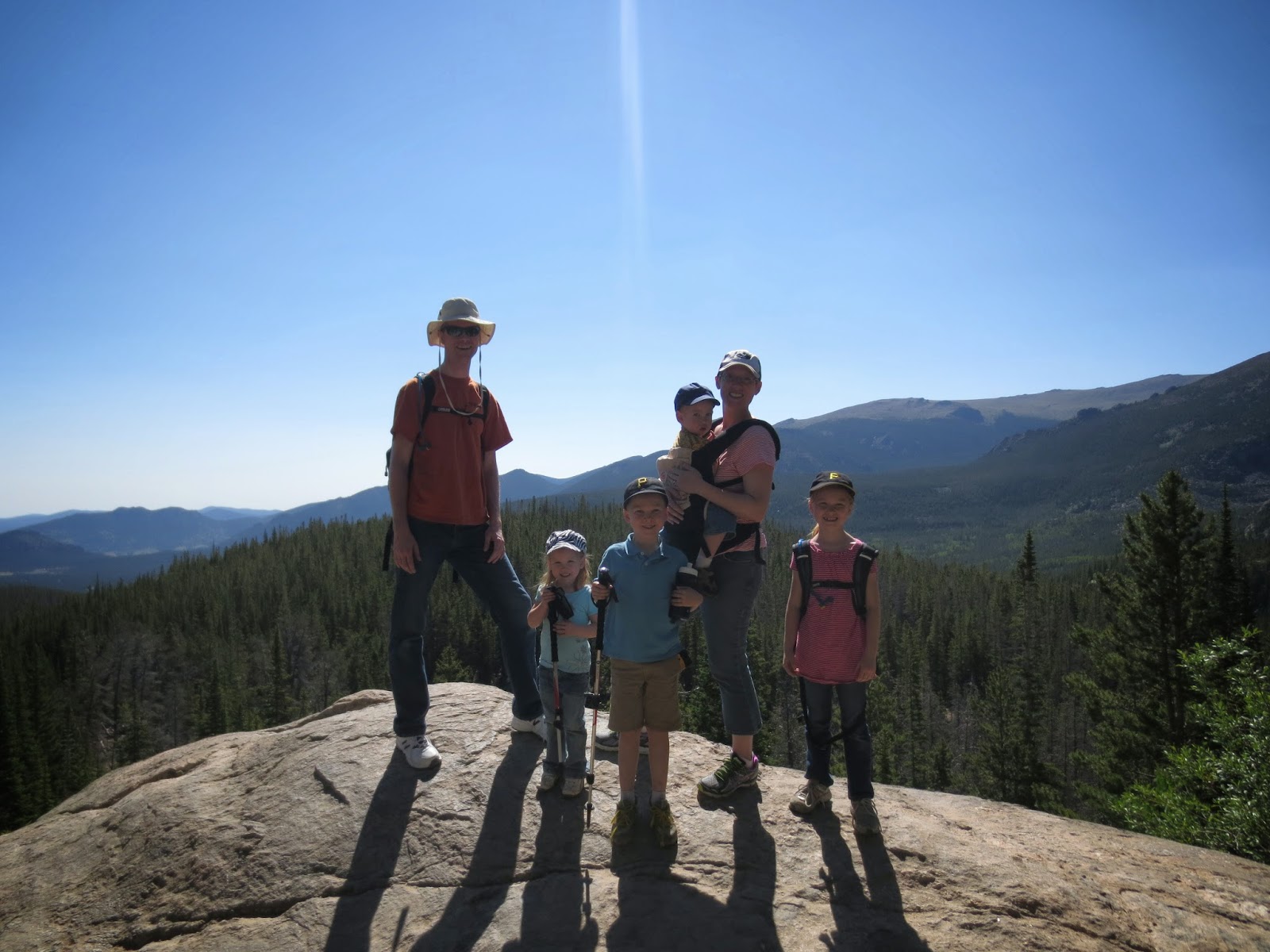 There were three lakes on the trail, Dream Lake, Nymph Lake and Emerald Lake.  Each was prettier than the last and Emerald Lake was well worth the extra steep climb at the end.  The setting of the clear mountain lake under the mountain ridge was just beautiful. 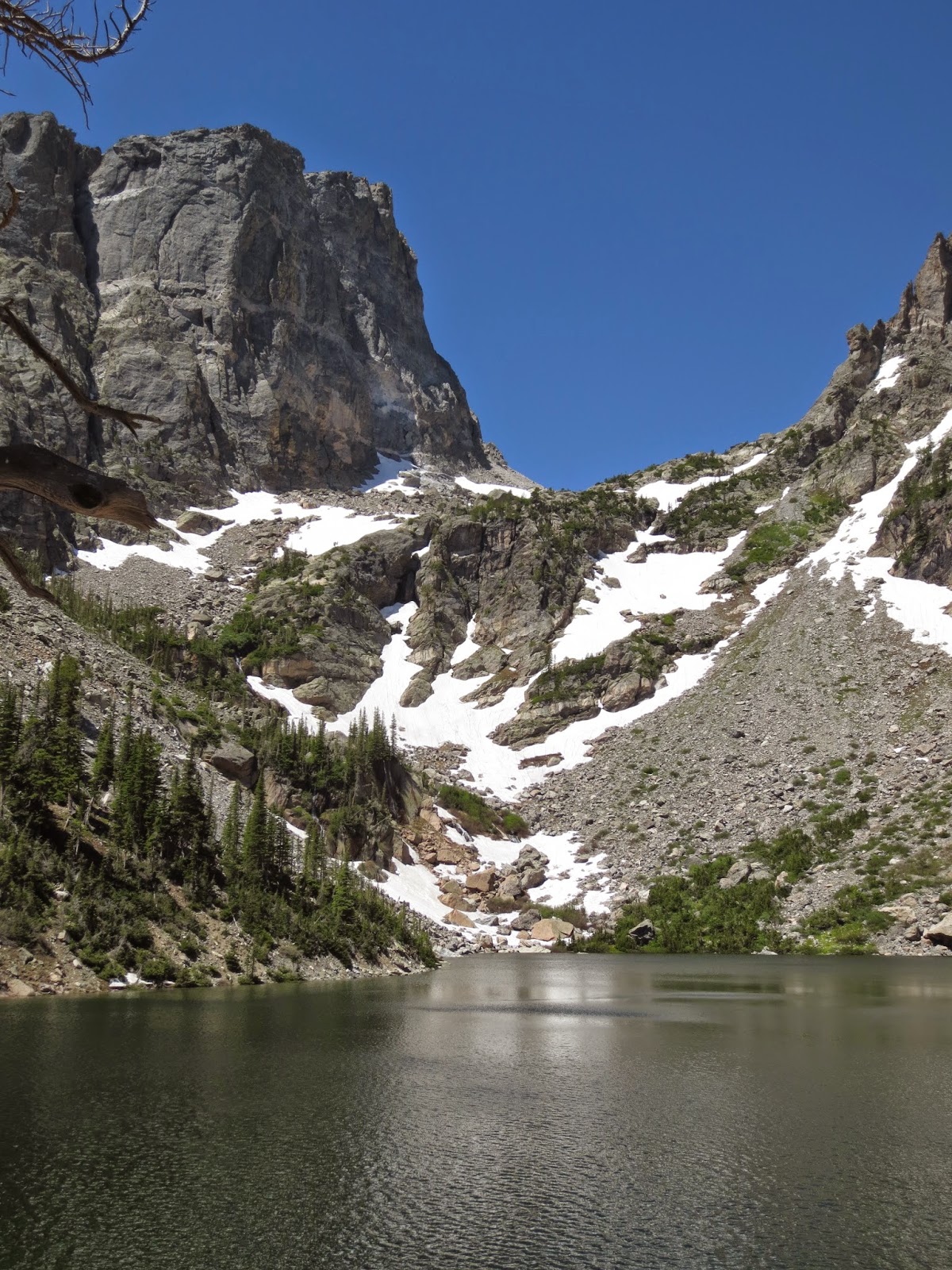 We were glad we started out early because things began to warm up quite a bit as we made our way down the mountain.  We spent the rest of the day chasing the shade from our canopy at our camping site and the kids played with the kids in the site next to us.

That night we had some rain and wind making for a very long night.  We found out our tent doesn't do well in the wind as it buckled in on the kids.  Thankfully we stayed dry and the made it through without having any serious problems. 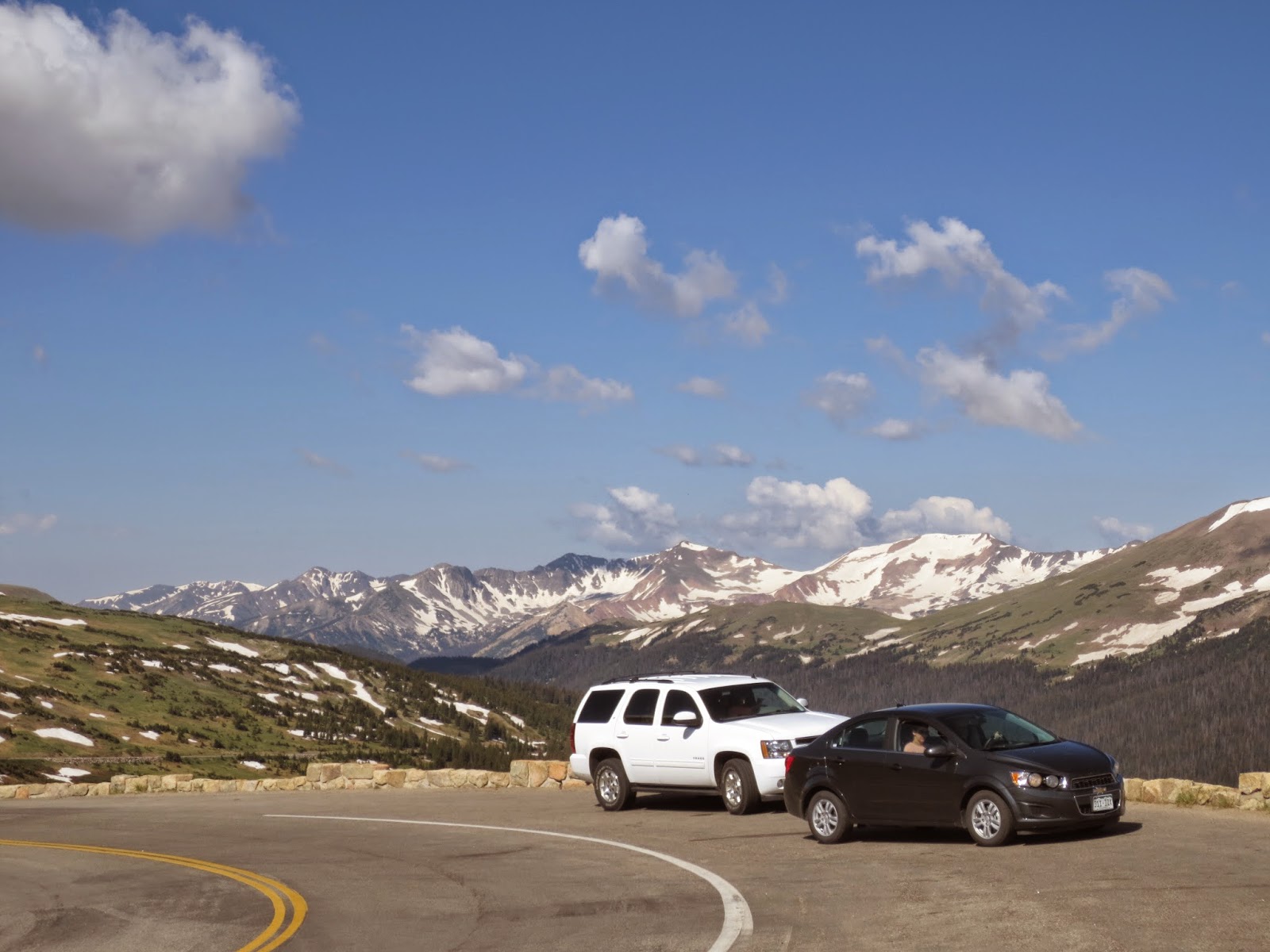 The next day we left early under clouds and fog.  It was only about 45º when we got on the road and headed out of the park.  We saw a large elk enjoying his breakfast once we rose out of the fog. 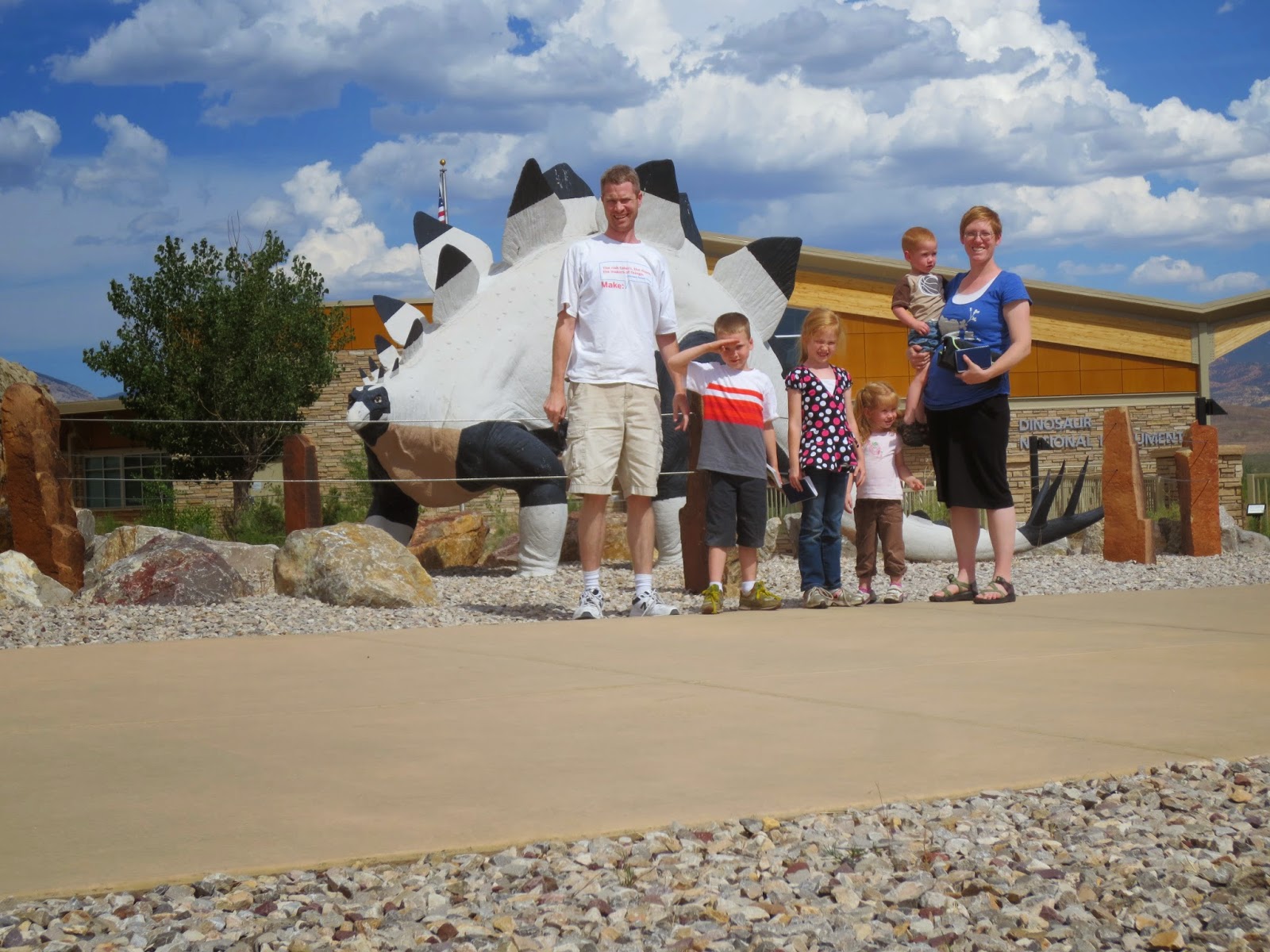 Our next stop was a lunch stop at Wendy's and the grocery store.  Our meal provisions had run short.  We then made our way to Vernal and Dinosaur National Monument.  It was pretty warm once we got there so we found a camping spot and went back to the visitors center.  From there we took the shuttle out the old dinosaur quarry.  It was kind of neat to see the place where the dinosaur bones we see in Pittsburgh came from.  Charlotte was disappointed because there aren't a lot of dinosaurs put together, just bones in the wall.  I don't think I would make it a destination but it was a good place to stop since we had time. 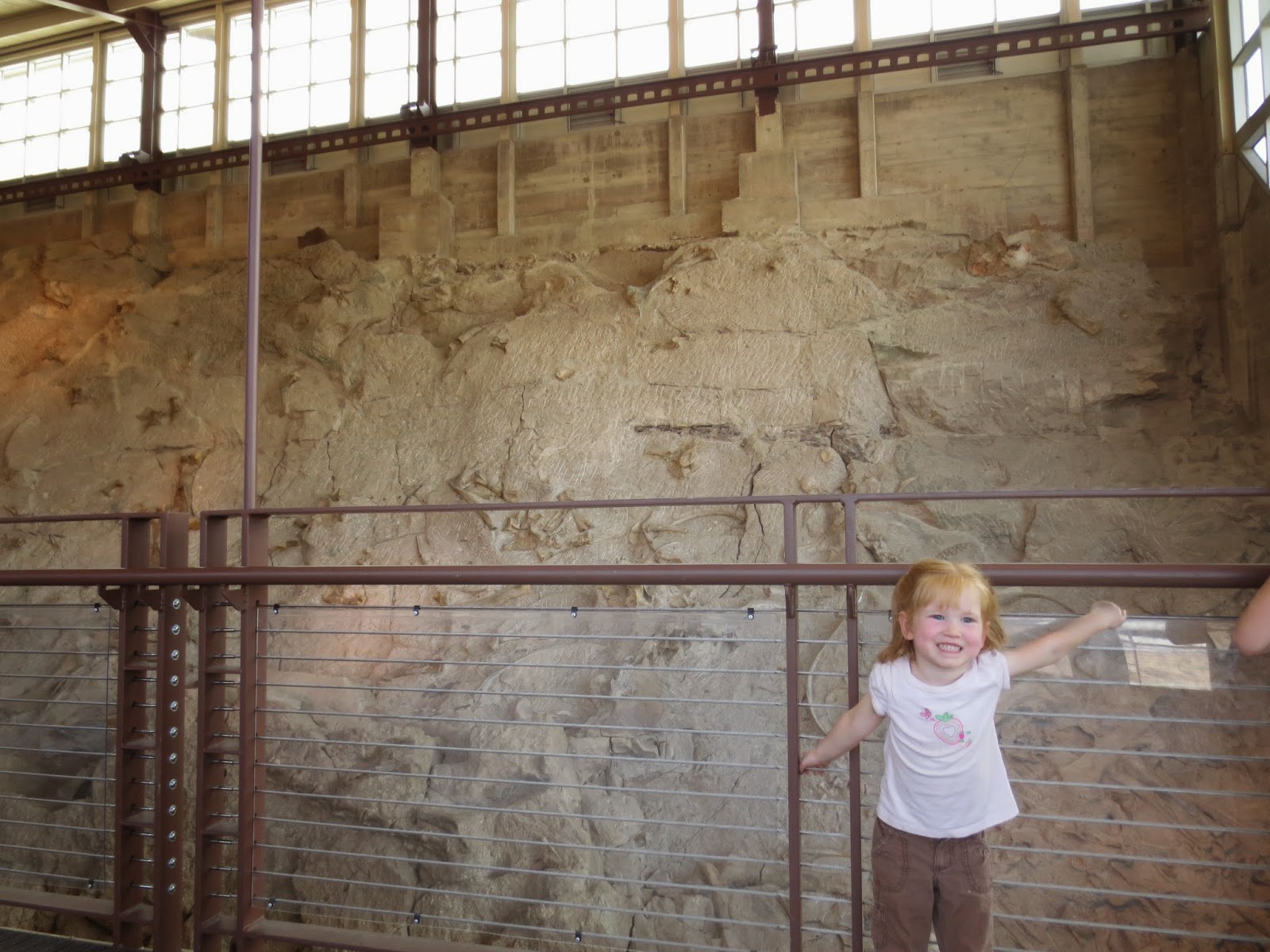 Back at camp, we waded in the Green River for a bit and once it started cooling down we ate dinner and let the kids play for a bit then off the bed.  The next day we were back on the road by 8 am and anxious to get to Provo and hot showers. 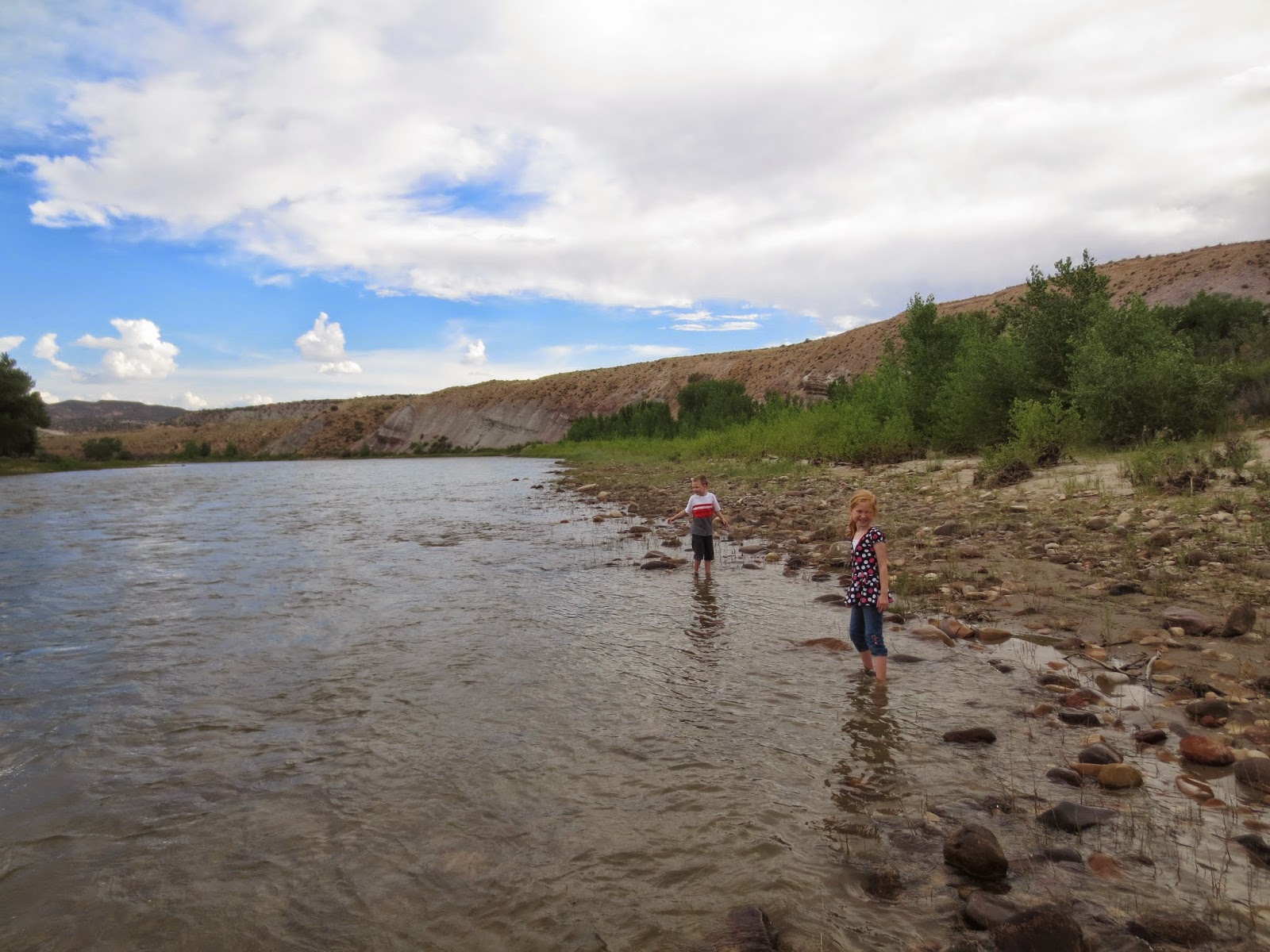 It was a good trip.  I'm glad we stopped and got to see some really neat things.  Rocky Mountain National Park is definitely on our list of places to stop again.
Posted by Heather at 7:51 PM 3 comments:


Summer begins to have one meaning around our house, road trip.  This year was no different and for about the past 6 months we have been planning yet another epic road trip.  (I will have to stop thinking of each one as epic because they don't ever stop being epic)  We drove 5,600 miles and saw most of our extended families and a bunch of neat places.

We left on July 3rd and our first stop was to Nauvoo, Illinois.  It is a sleepy little town on the Illinois/Iowa border but it holds religious and personal significance for Hyrum and I.  In the mid-1800s the LDS Church built a community there.  It flourished for a while and then at the martyrdom of Joseph Smith, the prophet and his brother Hyrum, the mob violence drove the Latter-day Saints west and eventually to Utah and the Salt Lake Valley.

There is a historical part of town where you can visit old stores, a blacksmith shop, a bakery and various homes of people who lived there at the time.  There are young performing missionaries there in the summer and they put on different shows through the day and evening.  We arrived in time for their night time show on the 3rd.  The kids loved it and it made me miss my dancing and singing days in high school.  We laughed and shed a few tears.

We started the 4th of July off with a visit to Carthage jail where Joseph and Hyrum Smith were wrongfully imprisoned and martyred. We spent the rest of the day in Nauvoo, riding in an oxen drawn wagon, exploring the workings of the brick maker, blacksmith, and finding where various ancestors owned land in the city.  We even saw friends we knew from Texas.  (They were on their way to Pennsylvania from South Dakota.)

The Spirit there was beautiful.  I love learning about how our ancestors lived and the faith they had even amidst so many trials.  The kids enjoyed the activities and the musical theater things we saw.  I look forward to going back again when they can really appreciate all that happened there and the spiritual history.