I have a quilt in my collection made by my Grandma Jasperson. Oh, how I love that quilt. It is yellow and has a kangaroo on it. I use to take it outside in the to lay on in the summer, it was always on my bed in the winter and I was generally cuddled up in it anytime I needed a cozy place to hang out.

When Hannah was born I was thrilled to find out that her grandmothers would be making her quilts as well. Jonathan received the same gift from them too. It's always fun to see what creative pattern they pick and what fun materials they find. I love it as much as the kids do. I can't get Hannah to give them up in the summer. I have to hide them so she doesn't get too hot.

I know they'll treasure theirs as much I treasure mine. Since their grandmas can't be here all the time I'm grateful they have a reminder of them. They have worked so hard on these quilts and now my kids have beautiful reminders of their grandmas. Thanks, Moms. 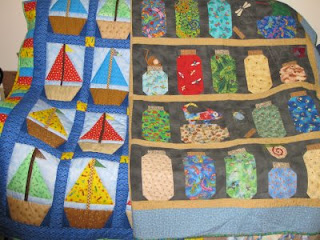 After spending the past few years saving receipts and using the spreadsheet method of budgeting, Heather and I recently discovered mint.com. Mint.com is a place to collect financial information, such as savings and checking accounts, brokerage information and even credit card and other loan accounts. I was pleasantly surprised to see the plethora of institutions they support, even smaller regional ones. The site collects all your transactions into one place, and provides great budgeting tools and alerts.

Mint.com is read only, meaning that if something happens and our login information is compromised, criminals can't actually get to our funds. The best part: should you leave, they promise to remove all of your personal information from their system within 72 hours. I highly recommend mint.com.
Posted by Hyrum at 3:22 AM 2 comments:

When we were first married a few years ago, we inherited a large bookcase-type Thing from Heather's grandparents. It was big and heavy, but we like to read and needed a place to put our books. When we moved into our current apartment, we put the Thing in a corner, loaded it with stuff and moved on. Occasionally, when a shelf would come out, or a door wouldn't open, we'd wish for something better, but it generally suited our purpose.

Last Friday evening, we were invited to some friends' apartment for a pudding social, and I stood admiring their bookshelves. Pretty soon, the conversation turned to where they got them, and it seemed we were the only family there who hadn't spent at least one Saturday wending our way through Ikea, the Swedish home furnishings megastore. We came home, looked at the Thing in the corner, and decided a family field trip was in order for the next day.

Now, I'm not normally a fan of megastores of any type. Our current meager situation forces us to shop at the likes of Wal-Mart and Costco, but I am not a fan. Finding assistance at Wal-Mart is like going on an African safari, where the probability of seeing a blue-vested associate approaches zero. The store is so large, it seems to have everything, and yet it always manages to lack the one item I'm searching for. Such general disillusionment was the initial cause of my hesitancy to go to Ikea, but we decided to give it a whirl.

Even from the exterior of the store, I was impressed. They had family friendly parking: extra wide parking spaces close to the store, useful for getting kids in and out of the car! The store had a casual, move-at-your-own-pace feel, with maps and arrows and everything—with none of the frantic mania that is characteristic of Costco or Wal-Mart. There weren't any annoying used-car-type salespeople, and the place seemed to cater to families. Even the in-store restaurant was decent: not a McDonald's knockoff, but a reasonably-priced bona fide Swedish cafeteria. (We had full lunch and desserts all around for about $21.)

In the end, we bought a couple of 31" bookcases with doors, plus a corner bookcase, all to replace the 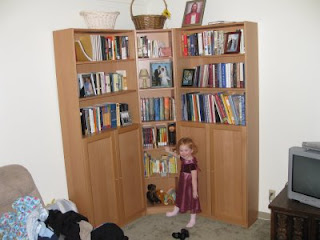 Thing. I spent the afternoon assembling them, and by Saturday evening, we had replaced the old setup with the new, which seemed to give us more storage space and give the room a more open feel. I was somewhat nostalgic about tossing the Thing, but we didn't have any use or space for it. In the end, we hauled the Thing to the take-it-if-you-want-it area near the local dumpster, and I'm happy to report it had disappeared within 24 hours: somebody had found a new home for it.
Posted by Hyrum at 3:50 AM 2 comments:

I've heard a lot of jokes about the yearly Christmas Card or letter. Though it is a pain in the neck trying to get that done as well as all of the other stuff we do to prepare for the Christmas Holiday, I look at our wall of cards, pictures, and letters and I love it.

I just want to thank our family and friends that have shared a little bit of themselves with us this year--whether we have a card to prove it or not. With the fast pace of life that we live in it's easy to forget or say, "tomorrow" we'll call or write or visit. We all know that tomorrow never comes. So thank you for thinking of us.
Posted by Hyrum at 8:29 AM No comments:

We spent the holidays up at my parents' house north of Dallas, along with my 5 other siblings and whatever spouses and children are attached to them. In all, it was a good couple of weeks to unwind and work on other things. Among the highlights:

It was just a good time to unwind and prepare for the exciting year of 2009 ahead.
Posted by Hyrum at 7:00 AM 1 comment: