I never thought this would be how we would experience a broken bone in our family.  I imagined it would Jonathan with lots of blood and gore.  Well it wasn't.  Hannah broke her arm Sunday night and here's the story.

Sunday night we were at some friends' house for dinner.  They live just down the street so we walked down in the rain and had a lovely dinner while their older children entertained ours for a while.  Pretty soon Hannah came up to ask if she could take her tights off.  I said, "no", simply because I didn't want her to get cold and I really didn't want to have to track down teh tights and out them back on when we left.

Well pretty soon, I hear a strange cry and didn't think much of it.  Then Hannah came upstairs in the arms of our friend.  She was hysterical.  They had taken her tights off and in the process she fell and put her arm behind her to break her fall.  Note:  Always sit down when taking off tights, pants, anything like that.

I didn't out much stock in the crying because Hannah can be quite dramatic.  I looked at her arm and there seemed to be an odd bump so I took her to Scott, our host and figured he'd tell us what to do seeing as he is a doctor.  He took a look and thought it was alright and just bruised.  He suggested having her sleep on it and then if she was still in pain to take her in.

Sunday we put her to bed with some tylenol and I told her there was nothing we would do until the morning and to try and get some sleep.  I went in once, at about 10 when she woke up in pain, but other than that I thought she slept fine.

In the morning she claimed to be in a lot of pain still so, I found someone to take the little kids for an indefinite period of time and we headed to the Urgent Care clinic since I still didn't think it was broken and I didn't want to to sit in the ER for them to tell me that.  The doctor saw us and put on a splint to immobilize the arm.  Then she sent us home with a call in to a orthopedist saying that she didn't see a break in the x-ray but we should make sure.  So much for my trying to save time.

The Urgent Care doctor called to say the radiologist had seen a break so we made sure to get an appointment with the orthopedist.  We couldn't get in until today after school so off to school she went with her splint and her sling.  We went to the doctor this afternoon and sure enough it was broken.  (The top of her radius for those anatomically minded individuals)  Her arm is also pretty swollen from fluid but it should heal nicely. 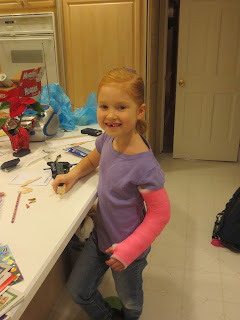 She was a brave girl and was really excited to get a pink cast.  She'll have it for four weeks and then we'll have to work hard to strengthen her muscles and work our the stiffness.  For a while though, she gets to be the star with her cast.
Posted by Heather at 8:55 PM 6 comments: