For my part, I travel not to go anywhere, but to go. I travel for travel's sake. The great affair is to move.

Robert Louis Stevenson
Yesterday morning, I set off on my trip to Skövde, Sweden. I was headed there for an other conference, this one an academic conference on Open Source Systems (OSS 2009). In addition to going to the conference, it's an opportunity to visit with some other collaborators, and get to see a part of the world I've never been to. Getting to the conference turned out to be quite the great affair, as is any trip to another continent.

Heather and I left Austin on Sunday afternoon, driving up to Allen to visit my folks. My flight was out of the DFW airport, and Hannah and Jonathan would be staying with their grandparents after Heather comes and joins me, so we decided to use their home as our base camp for the trip. In driving to the airport, we hadn't even made it to the highway before being rearended. The car was drivable, though, so we continued on to the airport, but were both a little shaken for the event. 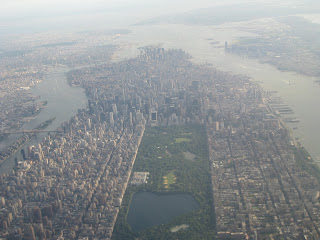 The first flight was uneventful, and I had a couple of hours to kill in Newark Liberty. My overseas flight began well, with an amazing view during initial climb passing directly over Manhattan. The picture really doesn't do the view justice, but I was glued to the window for some time. After we moved over clouds, I spent some time working and watching the movie/TV thingamajig at my seat. I didn't get much sleep, but I never do on airplanes.

Upon arrival, I made a quick jaunt through customs, and then took the Arlanda Express train to the Stockholm Central station. It was a little pricey, but a very quick way to get into town. From Stockholm Central, I easily found my train and settled in for a jaunt to Örebro. By this point, I was pretty tired, and had to try and stay awake, just so I wouldn't miss my stop. Since I had all day to kill before arriving in Skövde, I decided to take in the castle and town of Örebro.

I managed to fine the town okay, but it was raining and cold, and I felt a pretty sizable cold coming on. Still, I hadn't yet eaten, so I threw my luggage in a locker and wandered in to town to take a look at the castle and grab a bite to eat. I eventually found the park with the castle in it, and took a walk along the river, all the while dodging drizzle and people on their bikes. I got some food at a local cafe, and had an interesting conversation with a man from the town.

I was planning on spending several hours in Örebro, but after walking the town, suffering through a cough and sore throat in the pouring cold rain, I decided I'd had enough, and made it back to the train station in time to catch the next train to Skövde. I checked into my room, and have spent the rest of the time decifering Swedish TV and trying to get the wireless network to function. My throat is still sore, and I've got a headache, but I've arrived at my destination (at least for a few days).

An observations: Coming to a "foreign" country is always an interesting experience. The language is different, the customs are different, even the food is different, but people are still people, with common challenges and triumphs. As we were flying in to the airport, I couldn't help but imagine what the people in each of the farms or cars was doing or thinking, and I suppose it's very similar to what I would have been doing on a Tuesday morning. I'm thankful for this perspective that travel gives me.
Posted by Hyrum at 10:08 PM