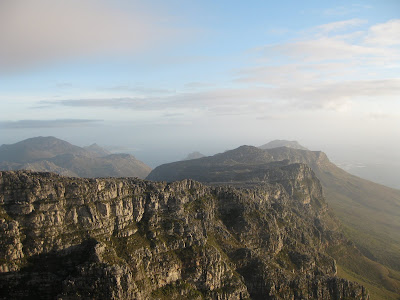 The highlight of the trip wasn't actually in Cape Town: it was in Johannesburg, where I stopped for a couple of days to visit some friends.  Ten years ago, I served in Los Angeles as a volunteer missionary for The Church of Jesus Christ of Latter-day Saints.  The mature couple assigned to supervise the missionaries in that area ten years ago, has now been assigned to be in charge of training perspective missionaries in the Church's Johannesburg Missionary Training Center.  Compared to the MTC in Provo, Utah, this one is tiny: only 19 missionaries the week I was there.  But the experience was a good one, and I'm glad I could be there.
Posted by Hyrum at 11:48 AM

Wow, that's so interesting about Robben Island. I hope we can hear more about your trip to S. Africa sometime! :)