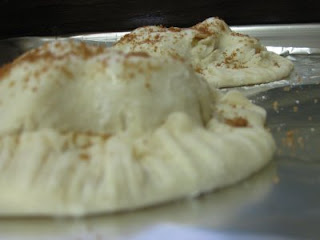 For those of you waiting for this, I apologize I am a day late. I was racking my brain for what yummy treat to make and realized I had a couple of apples in my fridge just taking up space so I decided to make something like an apple pie. I have decided that making an apple pie probably would have been easier. It's a hard recipe for kids to help with but Hannah was an excellent apple scooper. It was yummy and a fun way to have individual apple pie treats. The recipe below should make about 6. Feel free to add or decrease as desired. When I bake with apples I really like Granny Smith one but just make sure it's a baking apple.

Slice the apples thinly and uniformly. The smaller the chunks the better for these turnovers. Stir in the other ingredients and set aside. 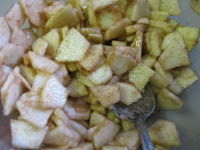 Stir flour and salt together. Cut in shortening until the mixture has pea sized chunks.
Add water a little at a t 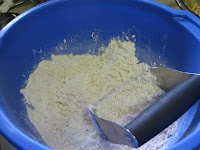 ime until crust is moistened. Divide into six equal portions. On a lightly floured surface roll into 6 inch circles. Spoon 1/2 cup apple pie mixture to one side, leaving about 1 inch clearance for sealing. Fold over top half of crust. Pull bottom crust over top and seal with a fork. Place on two foil-lined baking sheets. Brush with milk and sprinkle with cinnamon and sugar mixture. Bake at 350 degrees for 40 minutes or until crust is a golden brown. Enjoy warm with a scoop of vanilla ice cream or cold all by itself.
Posted by Heather at 10:31 AM

We got to be the happy recipients of a couple of said turnovers. Yum!

Sounds yummy Heather.
Your kids are so cute and getting so big.
Hope life is great.

Yummy. I wish you could bring some over to me...wishful thinking. Miss you Heather!