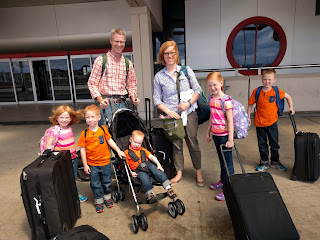 We arrived at the airport ready for our next big adventure.  We made it past the ticket desk without any drama, went through security with probably the best experience ever, and sat waiting for about and hour and a half.  The kids watched planes land and asked questions about the planes and what was going on around them.  Ben, Spencer and walked around a bit  and then "our" plane arrived and the real waiting began.  The kind of waiting that feels like an eternity because you can almost touch the thing you're waiting for but it is just out of your grasp and there is nothing you can do to make it come any closer, any faster.  It was pretty rough, but we got on the plane pretty quickly and got everyone settled. 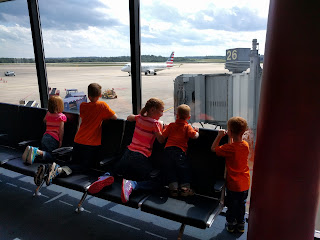 The kids loved take off.  Hannah was giddy with the feeling of it, even Ben stopped crying to smile and take in the sensation of it.  We flew to Charlotte, North Carolina first and that flight was our test.  After disembarking our plane, Jonathan declared it, "not that bad".  The other kids agreed though their spirits dimmed a bit when we reminded them that the next flight was 6x longer. 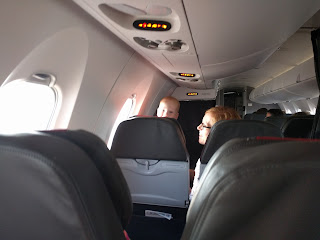 We grabbed some pizzas at Papa Johns, stopped at the bathroom, and arrived at our gate just in time to board.  Now lest you be fooled that this all went really smoothly, it really did, but not without a lot of whining that we weren't getting dinner soon enough, or when would we be boarding, or I have to go potty, a few minutes after the pilot turns on the fasten seat belt sign to prepare for landing.   All pretty minor stuff but it adds up in a big way.

The long flight was also pretty uneventful.  It was long and uncomfortable but we all had our individual televisions.  That isn't a good thing when you can't reach your child's in the middle of the night or tell him to turn it off, but when you just want them to sit still it works well.  Between the quiet book I made, the travel toys I bought and the television the kids were pretty entertained.  It took about an hour and a half for the kids to calm down enough to sleep due to dinner and beverage service.  Spencer and Ben then fell asleep on me in various fashions.  I slept for a couple hours and everyone else but Jonathan also fell asleep.  I woke up to find Jonathan still watching movies without any way to communicate to him to turn it off and sleep.  Finally I caught his eye and he went to sleep but unfortunately Hannah woke up.  Hannah and I enjoyed the media services for the remaining 5 hours of our flight.

We landed in London around 9:30 am and waited for at least 30 minutes at the gate to get our stroller then we waited for about 30 minutes at border control.  After that, we went to claim our bags and found two of them missing.  We waited there for probably 20-30 minutes while Hyrum reported it and made arrangements for their delivery on Thursday.  We then headed towards the Underground for our train rides to our flat.  Within about 5 yards of the underground entrance Hyrum spotted a cellphone place that sold SIM cards for our phones so we waited some more there.  By this time the kids were about waited out.  Charlotte was so jet lagged she was not very pleasant at border control.  We did make it onto our first train without any problems--we did run to make sure we caught it though.

We went several stops on one line and then changed lines which involved carrying ourselves and our bags up more stairs and through a few tunnels.  The subway is always warm and feels stagnant and the trains are ventilated but not air conditioned so we were hot, tired, and stuffed onto the Subway.  Ben slept for quite a while on the train and all the way to our flat.   I dozed a bit and I think Charlotte did too.   We walked the final half mile to our flat and we were all ready to fall over. 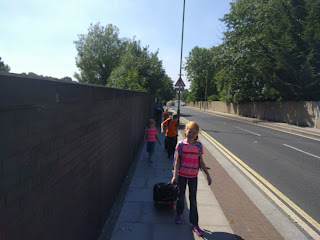 We arrived here around 1:00 and after putting a few things down and handing out toys I sat down on the couch ready to stay there forever.  I was really too tired to think, move or do much of anything.  I was seriously underwhelmed by the apartment.  We found it cluttered, the kitchen was a bit greasy and I couldn't figure out the stove and the oven.  We did however get our cell phones set up, unpack a bit and I went to the grocery store.  It was about all I could do to think about when we needed to get us through the next 24 hours.  You have to deposit a coin just like at Aldi's but I didn't have any pound coins so I had to use the little basket for my groceries.  It was overflowing when I got the register and then I had to figure out how to pay for my groceries since they only use cards with chips and I wanted cash back.  I got it all sorted out after the cashier realized I was asking about the cost of the trolley when I asked about carts.

I got home tireder and hotter than I already was and decided to buckle down and fix dinner.  My blood sugar was pretty low and I felt a little light headed a couple times but I know it wasn't really going to get any better.  I was ready to cry when I went in to make dinner and couldn't turn on the oven to cook the chicken I had just browned.  I did cry a few minutes later when I told Hyrum I just didn't know what to do about dinner because I couldn't cook the chicken and the broccoli was already done.  We could light the stove with a match but we ran out of those before I could warm the broccoli up again. So we ended up eating cold broccoli and peanut butter and jam sandwiches.   Hyrum was sweet and cleaned up the kitchen for me.  We sat in the living room for a bit and I dozed in and out while the kids and Hyrum talked and played.  It didn't help that tempers began to flare as everyone just got more and more tired.  Enough was enough and we put the kids to bed around 8.  We didn't hear another sound out of them afterwards.  We followed an hour later and it didn't take long to fall asleep with hopes that Thursday would be a better day.