After I finished Hannah's bedroom this Fall I decided the other kids' rooms also needed a facelift.  So In February I started the process.

I started by taking down all the window treatments and wall decorations and filling the multitude of holes on their walls.  I am a terrible precision painter so I taped everything up after thoroughly wiping down the walls.  Then it was time to paint.  We tried several colors on Jonathan's walls before we decided on a darker blue gray.  I knew I wanted green for Charlotte and Spencer and after trying several shades, I found a bright green I love.  At first I was a little worried but it is so bright and cheery, it just makes me happy.  The kids really like their colors too.

I got the painting done and took a couple weeks off then Hyrum and I mounted shelves and curtain rods.  With Jonathan and Ben's room we went for an engineering theme.  I found an etsy shop that has blueprints so we ordered several of those and framed them.  They look great and really reflect Jonathan. 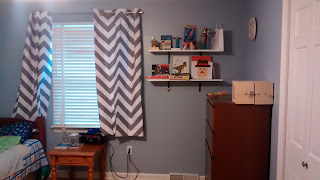 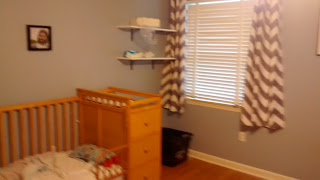 For Charlotte and Spencer I wanted to make some wooden decorations with some color and I fell in love with animal silhouettes so we decided to go with African big game.   They turned out well, just a little snaller than I wanted so I'm going to move them and figure something else out for the big wall in their room, maybe vines and a monkey, Charlotte really wants a monkey. 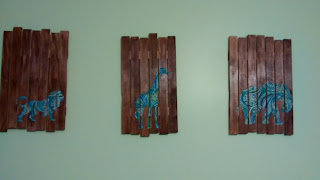 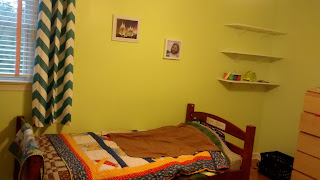 It feels so good to have them finished and looking so much better than before.  It's amazing what a fresh coat of paint can do.

There still a couple of things I want to do but the majority of the work is done and they love having spaces that are really their own.   Slowly but surely this house is beginning to reflect us.
Posted by Heather at 10:18 AM