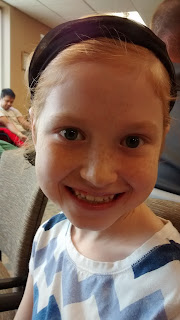 December was a busy month.  Our first big happening was the removal of Hannah's braces.   She only had this set on for four months and she was so excited to get them off.   We may have to get more later but I am crossing my fingers that she won't need a second phase. 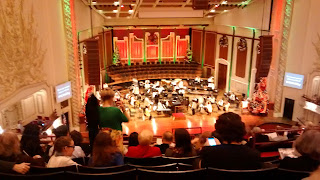 Hyrum and I went to a free concert at the Pittsburgh Symphony just before Thanksgiving and we loved it.  That night they were running a sale on tickets for some of their shows in December so we thought we'd take Hannah and Jonathan to a couple.   Hannah and I attended the Holiday Pops Concert.  We had a great time.  It was fun to be there and be together.

Hyrum and Jonathan attended a Star Wars concert where they played music from all of the Star Wars movies.  Jonathan has only seen the first movie but enjoyed being there with his Dad.  He's currently trying to pick out the Imperial March on the piano.

The day after that concert I flew to Washington State to see my little brother married to his Sweetheart.  They were super cute and though I hadn't met her and really didn't spend any time with her at the wedding, I'm glad they found each other.  It's always great to see a couple marry the right person, in the right place, at the right time.  I was glad to see them married but missed my family terribly the weekend right before Christmas.