Adam and Rachel's Wedding Reception was the weekend of President's Day and Valentine's Day in New York.  Hyrum was out of town that week so we waited until Saturday morning to head up there.  the drive was a little crazy for a bit while we drove through snow and windy conditions.  Thankfully it stopped about 30 miles south of Erie and we made it in good time.   We then went to the fire hall where they were holding the reception and set up the decorations. 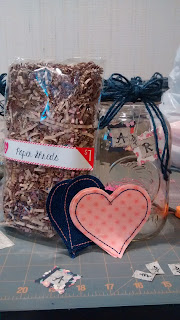 I made the hearts in coral and navy and then lined them in the opposite color.  I wrapped navy twine around the top of mason jars and made a small A&R for the jars.  My mom cut about 100 tree branches for us and we put those inside the jars in the paper shreds.  We then hung the hearts on the branches. 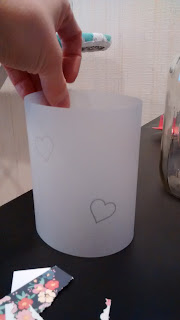 These were vellum luminaries with small hearts printed on them.  We put battery operated tea lights inside to give a little glow to them.  There were navy and coral table runners and squares on the tables.  It all ended up looking nice.  A bit simple but still gave the room a nice touch.  I'm sad I didn't get pictures but that is one habit I'm not very good at.

We celebrated Valentine's Day with conversation hearts, and I made my family chocolate covered brownies with mint and orange filling.  We also attended church together.  Rachel's parents came for the reception so after dinner of reception leftovers we sat and talked with them for several hours.

Monday we took our time getting ready that morning and enjoyed a tasty breakfast.  We broke in my mom's doughnut pans with vanilla and chocolate doughnuts.  After doughnuts,  Hyrum and I took our family, minus Ben, to a great hill and spent about 45 minutes sledding.  We'd forgotten a pair of boots so we had one unhappy child on our hands after the boots she was wearing feel off so we didn't last long.  It was fun though and after we got back to my parents' house, Hannah and Jonathan spent at least another hour playing in the snow.

We packed up the car and headed out around nap time.  We enjoyed the weekend and it won't soon be forgotten.