No project like taking down a deck is an easy task, and while I'm not yet ready to start cutting things apart, there were a few things that needed to be done.  Next week, I'll start pulling up deck boards, but right now, I have to do a little bit of prep work, namely taking down the light and undoing the existing electrical wiring to said light.  I don't want to have a problem when I start in with the saw next week!


First step: figure out which breaker controls the outside lights.  While I went through a similar exercise with the entire house when we got the main panel replace a few months ago, I didn't know where this specific light was.  I eventually found it connected to a 20-amp circuit for the downstairs bathroom, presumably so it's GFCI-protected.  Not entirely the approach I'd take, but it's just another one of those "you've got to be kidding me" moments which happens whenever I open up a wall in our house.

After turning off power, I opened the face plate and pulled out the old switch.  Fortunately, there wasn't anything too surprising, and I was able to disconnect the switch from it's power source and cap both the wires leading to the outdoor light. 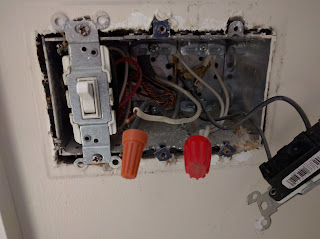 The light outside was a little harder to deal with, as the screws which fastened its junction box to the deck had long since been painted over.  After a couple of attempts with the impact driver, I decided it was worth it to just come back later with the reciprocating saw. 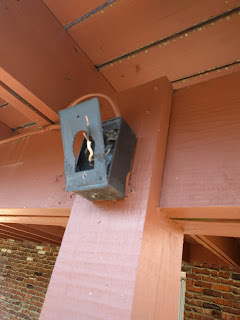