Saturday's adventure took us south to Dover Castle.  This castle was known as the "Key to England" as it stands watch over the English Channel at the shortest distance (21 miles) between England and France.  It's quite an impressive site as we saw it up on the hill from the city.

We trudged up the hill and found the entrances to the Secret Wartime Time Tunnels and Underground Hospital.  These both require tours and we weren't sure little people would be up for a guided tour--they tend to get a little bored--so we didn't do those.  We did however go down to the tunnel cafe to enjoy our picnic and check out the Exhibit on Operation Dynamo and Dover Castle's role in WWI and WWII.  After lunch, we went to the WWI fire command post and saw and authentic WWI cannon and shells.  The command post had a lot of interactive pieces so the kids were able to listen to conversations on old telephones, see real signal lamps and so much more.


After that we made our way to the Great Tower.  There was a falconry demonstration yesterday so we spent about 30 minutes watching a hawk, owl and falcon soar overhead while a woman told us about medieval falconry and hunting practices.  The kids loved seeing the birds up close and so did I.  The owl was particularly interesting since we only ever see those sleeping at the zoo during the day.  It was extremely windy so the hawk and the owl had difficulty flying, but the falcon, that was amazing.  It soar high into the air and would do an aerial role and swoop down to the arena at high speed.  We were all awed by that bird. 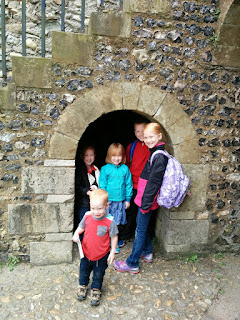 It was neat to see such an old structure.  After visiting Hampton Court Palace, to see something about 450 years it's junior was an interesting contrast.  Nothing but the original structure remains of Dover Castle but they have reproduced period decor.  There were several demonstrations going on in the kitchen such as spinning wool thread and making bread.  There were also several things for the kids to touch and handle.  I think that is why they appreciated this a lot more than some of the other places we've been.  They could sit in the chairs, play the instruments, feel the wool and touch the walls.  We climbed the stairs to the roof of the Great Tower.

After coming down we decided it was time to head home after buying our customary patch and magnet.  As we walked out we found the Medieval Tunnels.  Excitedly, we made our way down through a few tunnels dug during and after the Siege of 1216.  I love caves and these were the closest I'd come here in England.  It is just really cool to be in a place that has stood the test of time and been relevant for hundreds of year.  This castle was built in the 1180s but is predated by a Roman lighthouse.  There had been something on this sight for nearly 2000 years.  The castle and area has been used by English kings from 1066, when William the Conqueror built a timber-structure there, until 1958.

Basically, we had a great time here both because we were here together as a family and because it was a just a really neat place to be. 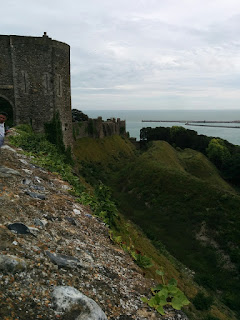