Tuesday was suppose to be one of the warmest as well as least windy days of the week so the kids and I determined to head into Bray so we could check out a few shops and then play on the playground down on the beach.

As we walked up to the bus stop, Charlotte and Spencer ran a bit ahead of us.  Spencer bumped Charlotte and down she went.  I watched it and didn't think much of it until she got closer.  She was concerned with her hands and her knee, but I was more concerned with the cut above her right eye.

Once more, we got on the phone to the International help line for our health insurance to find out the best place to take her for stitches or glue.  I texted Hyrum and after a few minutes determined he needed to head home to either take Charlotte to the hospital or stay home with the kids. 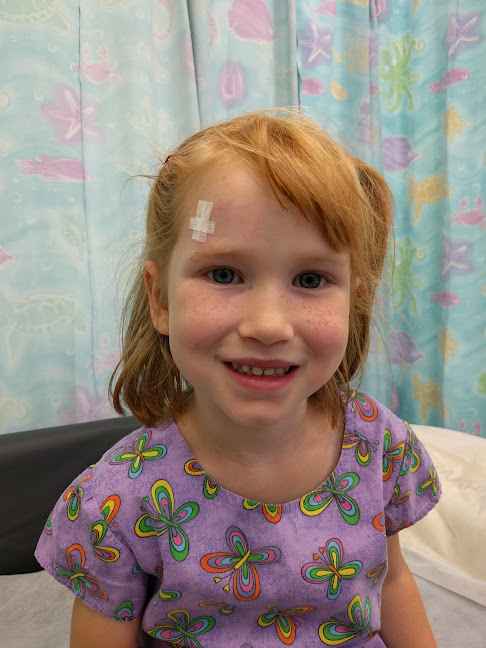 I ended up meeting him at the train station and handed her off to him.  At the hospital, the spent about 2 hours doing neurological  evaluations since she hit her head.  Thankfully the wound was clean and they were able to quickly clean it and glue it together.  They also placed strips on it to keep it covered and help reinforce the glue.  Hyrum and Charlotte got home around 5 pm after being gone nearly 7 hours.  Most of that time was spent in transit.  Charlotte is bruised and limping but she will heal.  We hope this is our last trip to the ER for the next few months. I am happy to say we were able to spend Wednesday as we'd planned to spend Tuesday.  It was very windy but we had a great time in Bray.  We stopped in a couple of shops including a bakery.  The kids each picked out a treat from the case to eat after their lunch.  We also bought a large loaf for lunch.  We bought gingerbread men, caramel tarts, an apple turnover and a couple of cronuts (these are so worth the hype).  We walked down to the Promenade and spent a couple of hours at the playground.  The kids had a ball. 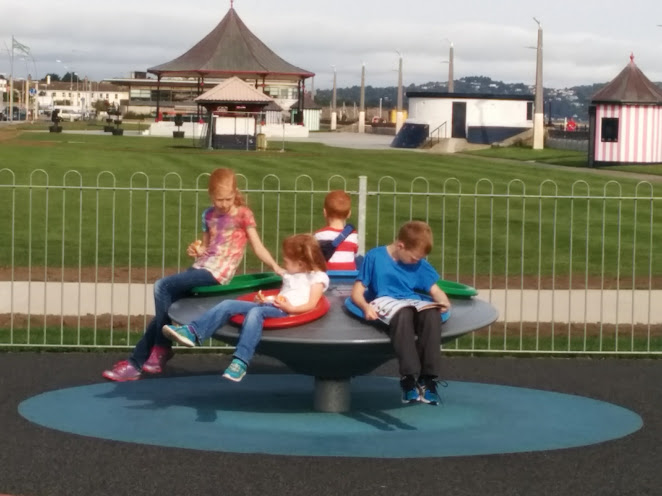 I'm glad that in spite of Charlotte's mishap everything worked out well.  The kids enjoyed their time at the playground and their bakery treats as well.
Posted by Heather at 9:47 AM